"Cause of SEI". The menu Uighur restaurant Cold dishes in Uighur cuisine are divided into two types: dishes of various raw vegetables and cold dishes, boiled and fried vegetables. This salad, again, refers to the second class. I looked in the dictionary the translation of the word "cause" - was the eggplant, though another source says that the correct name for this vegetable is "pidigan". I philosophize did not, and described the salad as well, as it is called in the menu. Ordered more than once, and then began to cook at home. Usually the eggplant is done layer-by-layer rolls or a salad, but this method helps to save a lot of time. So, for those who value time and thus want to diversify the usual menu, this dish is suitable in the best way!

Ingredients for "Cause of SEI". The menu Uighur restaurant

Step by step instruction of cooking "Cause of SEI". The menu Uighur restaurant 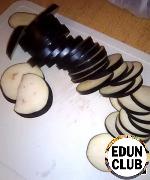 Eggplant wash and cut. The thickness should be not too thin, so the eggplant is not burned immediately, but not too thick. If the skin is thick, it can be cleaned. 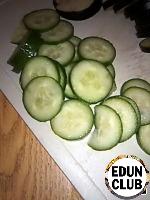 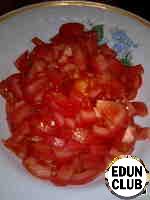 Cut the tomatoes into small pieces. The tomatoes were used, half less than shown in the photo, because I was also preparing another dish, which also needed sliced tomato. The pan good heat, and a La carte fry the eggplant. Then be sure to put them on a paper towel to soak up excess oil. 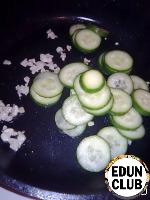 Fry 2 cloves of garlic and a minute later add to it the cucumbers. Fry on high heat for a few minutes. The cucumbers have to soak up garlic flavor.

Mix roasted eggplant, cucumbers, tomatoes, crushed and chopped garlic (the remaining 2 cloves). Add the spices, sprinkle with fresh cilantro and dressed with a sauce of soy, sugar and Apple cider vinegar at the rate of 1 to 1. In General, orientirueshsya to your taste. The sauce should be moderately salty, slightly sour and slightly sweet. Mexican layered salad
90 - 20м 8
This salad is a variation on the famous dish, chili con carne, but in a cold version. For a large company picnic or holiday table on a hot summer day - just an explosion of taste! Try it - it's mega delicious! Cooking does not take much time, budget and the variety of colors and flavor accents will delight You and your guests! 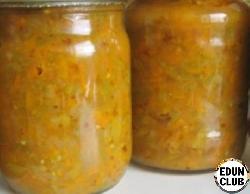 Salad green tomatoes "the Sun"
76 - - -
Whenever the late blight threatens tomatoes, make this salad in the winter from green tomatoes. Salad turns out very tasty, fragrant, rich and colorful. It can be used as a complement to meat dishes, as a separate dish, as a garnish and, in fact, as a salad. Green radish in Korean
32 - - -
A delicious winter salad of radish, a close relative of the carrot salad in Korean. This fresh, slightly spicy, fragrant and delicious salad that can be prepared in advance. This salad is well suited to winter dishes, and the radish is not only useful but also very budget. Tomato salad with bread and avocado
106 - 30м 4
Very tasty and juicy salad with crispy bread. Avocado adds lubricity, and sorrel - sour. The salad is very good in such hot weather, when to eat do not want to. Salad of red cabbage
57 4 - -
Recent recipes with this cabbage has increased, and I propose my own option. Spicy cabbage with fresh cucumber and sour cream.