Many Housewives freeze peppers for the winter fresh. I said many years harvested peppers, how to teach my aunt from Ukraine. It occupies less space than fresh-frozen, it has no thin upper films, and it turns out it's so fragrant! This pepper You with great success can use when cooking soups, borscht, pizza, vegetable and meat pies, main dishes, salads, etc. 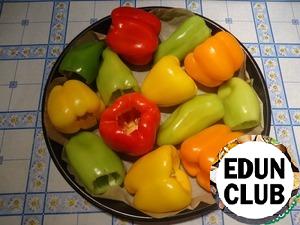 Coat the baking pan with sheet of parchment, he laid the pepper. 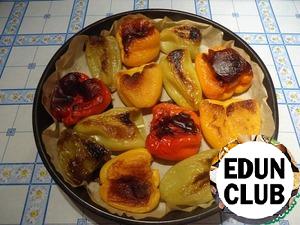 Bake peppers in the preheated oven at 220 degrees for 30-40 minutes (cooking time depends on the type and size of peppers). You can bake the peppers in the "grill" to a small darkening of skin. Then turn off the oven, allow it to cool down the peppers about 30-40 minutes. Peppers can be folded into a package to cool. Remove the vegetables with a thin top film. Put the peppers on the trays (if the pepper is completely cooled, the trays stacked in the package and tightly fasten) or a thin layer in a plastic bag. Now you can buy disposable containers, they are also convenient to freeze this chili for the winter, just choose a small volume and height, and pepper put a thin layer. In this case, the frozen peppers will be easy to break off. The resulting juice I spread over the trays. Put the peppers in the freezer.
This pepper can be used in cooking, as in thawed and frozen, for example, during preparation of soups and borscht. Hope You like pepper, frozen for this recipe! "Apple butter,"
78 - - -
The good old sandwich! Always helps out, helps out everywhere with what happens... but if on a fresh soft slice of bread spread with fragrant Apple butter, mmmmm...!!! Freeze bread as a storage option
99 5 - -
Decided to share with you in this way bread storage, and long storage. I heard about this method long time ago, but skeptical towards him. Before I had, and forced, to resort to it. In the summer, almost a day before leaving on vacation, we brought a bag of bread. And this is no joke, there were 10 loaves of different sizes. Help, what to do!!! The day we do not eat. Naturally half, and most were distributed to the neighbors, one loaf we ate, one decided to bring. But all the same remained three pieces. And I have already decided to experiment with freezing... we Arrived within three weeks, of course the house ball roll. Came the hour for frozen bread. And, you know, I was not disappointed. What the bread turned out delicious, it's unbelievable!!!. Decided to reset this option in recipes, but not the forum and not blog. Because the forums and dnevneki visit not all. Cauliflower, frozen
83 - 30м -
Our family loves cabbage, especially color. Used to buy frozen in packages. Now she is grown cabbage and freeze for future use. Gnocchi with spinach
130 - 60м -
Gnocchi verdi. Gnocchi - these are Italian dumplings. They are also made from corn, and from chestnut flour and pumpkin, but most often still made from potatoes. Products enough simple but the preparation requires some fuss, so it makes sense to prepare the gnocchi for future use. And then if one evening you will not be time for cooking, and will want something quick and tasty, and preferably interesting, having such a blank in the freezer, you can easily cook a real Italian dish in minutes. Liver pate
107 - - -
Love to freeze my early childhood. When you live in the North, where six months of winter, this is the best way to prepare and preserve food. The refrigerator was not in every home, but in the winter - cold, summer - glacier, dig the ground 1 - 1.5 m and here he is ice, permafrost. Beauty! Keep what you want. Therefore, since the beginning of winter when it became cold, and great-grandmother had a little free time from the farm (made all the work in the garden, do not graze animals and harvest them forever, hay), mostly in the weekend we sat down at the table and fashioned dumplings, dumplings made your cabbage and potatoes, grown in the garden. Did all this in large batches, carried out in the cold, laying out on a tray, and when this is cold, grandma poured in canvas bags and hung them in the barn. Frozen soup, soup in a small container. In the fall the stores imported apples, buy them as whole boxes, part of the apples were frozen from the frost, they become sweeter. In the evenings grandma cooked muffins and made bread, and it is also frozen and battered as needed. Put buns in the house, they rest awhile near the stove, would go - and how fresh. Relatives from great-grandmother a lot, and it is unknown when and who look at the light, and have something to treat. I love liver pate. Taught him how to do my aunt, I do it for a long time, 15 years. Well, what could be more delicious homemade pate, no thickeners, no colorings!.. The liver can use any, depending on preferences and what you have on hand: pork, beef (or part pork, part beef), avian.
More recipes