Enchiladas with meat and cheese The name of this dish I heard on TV in one of the shows on the discovery channel. The main character is so appetizing ate and talked about this dish that I could not resist. I went online to read what it's for Zver such "Enchilada". Enchiladas are a traditional dish of Mexican cuisine. Enchilada is a thin flatbread (tortilla) made of corn flour, which is wrapped in the filling. The filling is most often meat (usually from chicken meat), but can consist of eggs or vegetables. Rolled enchiladas are fried in a pan or baked in sauce (and sometimes cheese) in the oven (Wikipedia). After reviewing many recipes, I settled on this. As for me, this is the best option.

Ingredients for Enchiladas with meat and cheese

Step by step instruction of cooking Enchiladas with meat and cheese 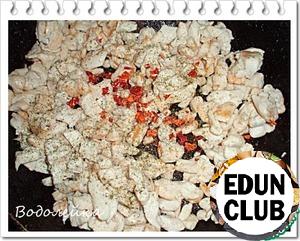 After adding salt, pepper and chopped hot pepper. The number of hot peppers to use according to your taste. To bring to readiness. 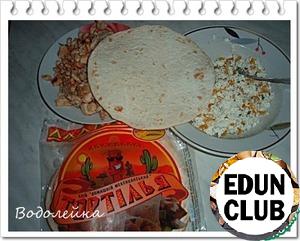 These are the cakes I used. 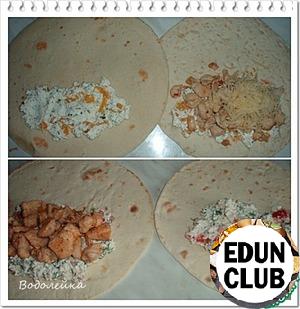 Now collect enchilada.
Take a tortilla (the tortilla). Put the cheese filling, the top layer of chicken and sprinkle with grated cheese. 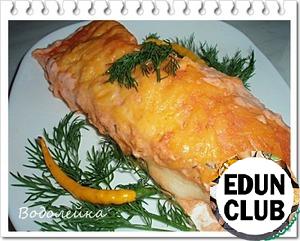 Enchilada is ready take out and serve. It is best hot. Here it is in context. Chicken in honey
316 - 80м -
Winterfell. Game Of Thrones. For all fans of the series and the book" Game of Thrones" and not the fans, too. I suggest to try a dish from the house of Winterfell. My daughter and I love this series and bought the book "a Feast of Ice and Fire "This recipe was very interested and we are not the first time doing such a chicken. It is elementary and it's worth a try, definitely. Chicken feed for a picnic on a crispy tortilla
0.6k - 30м -
I love the chicken breast and cook it as a kebab, it always turns out very juicy, and if you add a strip of bacon and vegetables... love to do a La carte skewers... I assure you, guests will be delighted Chicken "Kung PAO"
0.7k - 25м 4
The perfection of Chinese cuisine. Dear friends! If you have not tried Kung PAO, I beg you... try it once! With full responsibility I can assure you that this famous and traditional dish of the Chinese cuisine will amaze you in the heart just as impressed when me. It is such a taste explosion, it is such richness and poignancy that is impossible to resist not to eat the whole pan in one sitting. Prepared to laugh and just 25 minutes! On the website there are several variants of this wonderful dish. I'll offer a more extended version of a brilliant recipe for one of the Chinese chefs. This is his signature hit. When my favorite ate the Kung PAO, he moaned with pleasure, remembering the dish for a few days. Pilaf with Yoko-corn and peas
491 - - -
This risotto is rich, fragrant and incredibly delicious - required a hot dish on any holiday table for my children. And New year is no exception. Very delicious chicken wings
0.5k - 100м 4
If you love chicken wings in a thick, maharasta breading and tender, juicy meat inside - you here. I have prepared for you is not just another recipe wings, but detailed description of the technology with the secrets of how to make the wings really like in KFC. On this recipe I worked long and hard until I was able to achieve the desired result. Now coming to visit friends constantly order to prepare these wings. Technology prescription perfect not only for chicken wings, but chicken thighs, legs and even nuggets. Chicken souffle "Baby" with mashed potatoes
301 - - -
"Nutritious lunch" Is more on the second. This recipe I read in the journal "Love to cook" and since then cook quite often. This souffle will be delicious not only small, but big kids and even adults. And on prazdnechny table can apply. Hot chicken "Lyubchik,"
304 - - -
Found on the Internet is a recipe, and I so wanted to make it. However, the mayonnaise I substituted sour cream, maybe that's why the meat turned out naidinae, melting in the mouth, and the bell peppers gave a nice sweet touch.
More recipes