Horchata, horchata (Spanish horchata), orchata (cat. orxata) — the name of several kinds of soft drinks made from almonds, sesame seeds, rice, barley, or chufa tubercles. There is a legend according to which the king of Aragon, first tasted horchata in Valencia, asked what it was. Girl, ponessa drink, said it was "milk of the chufa" (llet de xufa). The king exclaimed: "Aco no es llet, aco es OR, XATA!" (It is not milk, it's gold, beautiful!). These words, allegedly, was the name of the drink :) horchata is prepared from various grains or nuts, with milk or without, sometimes with flavored types of vanilla and cinnamon. I suggest to try the horchata in Mexican, which is made from rice and almonds with the addition of cinnamon and vanilla. The drink is an unusual taste, fragrant and sweet, refreshing. 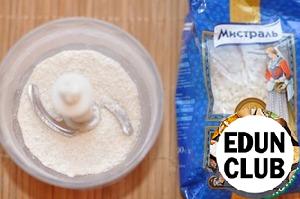 Figure grind in a blender or coffee grinder as much as possible.
The smaller figure will be, the better you will get the horchata. Pour ground rice into a large jar or pitcher, add the almonds, zest and cinnamon. The next day pour the mixture into the blender and blend again until the mixture became so smooth as possible. Add 2 cups of water and whisk again so everything is well blended. Strain the horchata through a thick cloth. Add another 2 cups of water, vanilla and sugar to taste. Cover and leave in the fridge to cool.
When I took a drink from the fridge, I noticed that a precipitate has formed, and again filtered it.
Serve over ice. Cocktail "Juicy summer"
305 - 10м -
A fragrant cocktail with a rich flavor. Very similar to its store-bought counterpart (whey-milk beverage), so beloved in our family. But, as the saying goes, why buy something in a package when there is a great opportunity to prepare yourself?))) Cocktail "Pink sunset"
0.6k - - 4
Delicate and sparkling cocktail for the contest "Burnt by the sun". Cocktail cucumber kvass
375 - - 2
A refreshing cocktail that will quench your thirst in minutes. Drink a La "Ira"
0.6k - 3м 1
Drink like ayran. Originality is not claimed, but this recipe is not found here. Refreshing, pleasant. Tomato cocktail
394 - - -
A cocktail worthy of attention, in my opinion! For the bar "Virtual drink" Cocktail with blackberries
463 - 5м 2
A delicious and nutritious cocktail. Cooked very quickly. A great option for an afternoon snack on a hot day. Banana-blackcurrant smoothie
323 - 10м 2
Not yet ended the season of black currant, offer all the sweet tooth and lovers of healthy and tasty desserts to try this delicious! The recipe I found on the vast expanses of the Internet... and fell in love! Unusual and harmonious blend of freshness, tenderness - all that's about it... help yourself!
More recipes