Puff pastry "on the contrary"

Until then, I twice tried to conquer puff pastry. But the first time the butter was too cold when rolling out the dough ruptured, in the oven melted butter seeped onto the pan, burnt, in General fiasco. The second time was the opposite – too soft butter got "tongues" between the layers of dough. This dough turned out such as you want the first time! In this recipe, not butter wrapped in dough, and Vice versa – the dough in the oil. Recipe from Pierre Herme's found in the blog niksya.

Ingredients for Puff pastry "on the contrary"

Step by step instruction of cooking Puff pastry "on the contrary" The oil at room temperature and mash them with a fork and mix with sifted flour until smooth. 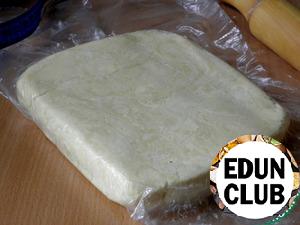 Oil derived put the dough on a piece of cling film, cover with the second piece and give it the shape of a square with sides of about 15cm. Carefully wrap the dough with foil and remove in the cold for 1.5 hours. 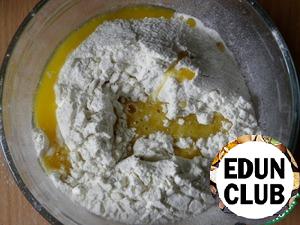 In a Cup sift the flour and pour in the melted butter. For mixing you can use the mixer and turn everything into dust, but I want to run all (honestly was just too lazy after washing the mixer:))), separately Mix water, vinegar and salt. A thin stream add the water to the oil the crumb, knead soft dough, extending from the walls of the Cup. The liquid does not pour all at once, will probably need less. As oil dough, roll out between two layers of film in a square, but the sides should be smaller – somewhere 13cm. Remove in the cold for 1.5 hours. On one edge to put the second dough, cover with second half and stung the edge. We obtain a square with sides of 18-20cm. Wrap in clingfilm and put into the refrigerator. 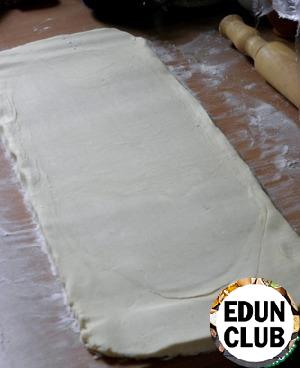 After one hour take the dough. It should roll out the layer one side of which is larger than the other three times. For example 60х20см. Have the dough horizontally and bends right and left sides to the middle. 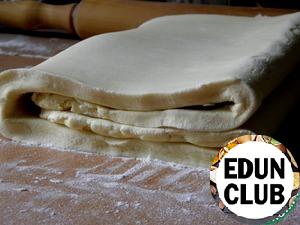 Bend the dough in half like a book. It turns out 4 layers of dough. Sweep away any excess flour, wrap in cling film, remove for an hour in the cold. Again, roll out the dough so that one side was longer than the other three times. And again folded – the folded edge and fold in half. Shaking off excess flour, remove the dough chill at least three hours, for a maximum of 48h. The last time roll out the dough and fold it like a business letter. Cool half-hour, pre-wrapped dough in foil. Half an hour later the dough is ready to use. It is possible to prepare, for example, a cake "Saint honoré" or millefeuille. Recipe vanilla milfay follows...) The puff pastry for 10 minutes
362 - 10м 6
This is a wonderful dough, just the wand. It is elementary to prepare, probably, and 10 minutes a lot... and the result is incredible with both soft and crisp, layered and delicious. No need to Skive, to roll out, don't need a lot of movements. Just all mixed in turn, and sent in the fridge. If you are going to cook something for several days, it is perfectly stored in the package in the refrigerator if you prepare for the future, you can send in the freezer. Another plus of it is that the ingredients are approximate, sour cream well model for yogurt or sour milk, we pour the flour if a little sticky. Fat also use any or combine, you can take the margarine, butter, lard, whatever. Rolled very easy since the dough is soft and elastic. This rule you will puff the reeds with caramel crust, 4 pan. My friend was preparing kurnik from this test and said that never again and will not cook with the purchase, it turned out much tastier. Recipe of my mom's cooking notebook, for which many thanks to her. Puff pastry and homemade products
362 4 - -
Very hearty dish that can be cooked for guests. Puff pastry-croissants, rolls, puff
294 - 30м 3
Hello! Today we will make the best puff pastry at home. Describe in detail how and of what is puff pastry. Recipe of puff pastry are very simple: take 500 grams of flour 10 grams dry yeast 50 grams of sugar, 10 grams of salt, 1 egg, 125 grams of milk and 125 grams of cold water, 200 grams butter unsalted butter and make a better puff pastry. Also in this video you will see step-by-step recipe baking in the oven, it will be a croissant with condensed milk and chocolate puff with peaches and roll with prunes! Each stage of the preparation of puff pastry the maximum described in detail and discussed. Puff pastry
0.5k - - -
I want to offer you, dear cooks, recipe of yeast dough. The dough is versatile, can be used for sweet and savoury baking. Ideal for croissants. Also this dough you can prepare for the future. The dough kept well in the freezer. Easy appetizer with olives
353 4 35м 5
Appetizer is perfect for all lovers of olives. Dough and pastries out of it
0.5k - - -
Versatile and delicious dough without eggs from my princessy on LJ i_lara. The dough is just perfect for baking, through long-term "resting in the fridge", the pastry turns Golden, well baked, crispy and melting in your mouth crust. Try it!
More recipes