Yesterday, the first recipe loaded suspiciously quickly. Probably why the second did not want to be loaded neither the whole nor in parts. Today I'll try to catch up. Millefeuille translates as "a thousand petals". Flaky pastry and creamy custard silk cream. Reminded me of beloved by many "Napoleon". 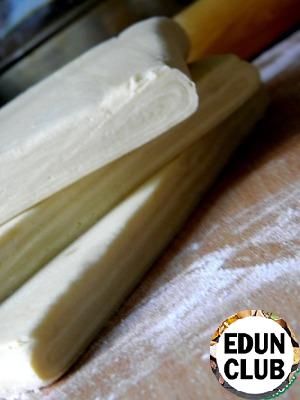 For militia will need puff pastry "on the contrary", carmelitano
(link at end of recipe).
For this cooked recipe divide the dough into three parts. Vystelim a baking sheet with parchment paper. Wetted it with a brush. I was comfortable to spray water from a spray bottle. Roll the dough into a thickness of 4mm. about 26х35см. 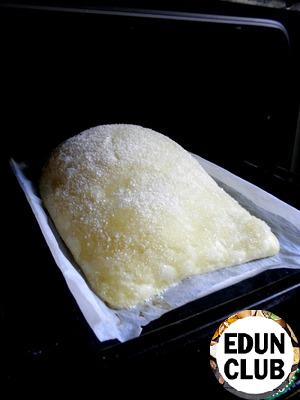 Using a rolling pin to transfer the dough on a baking sheet, cover with film and put in the fridge for an hour or two. Preheat the oven to 220-230C. Chilled dough evenly sprinkle 1.5 tbsp of sugar. Place in oven and immediately reduce the temperature to 190C. Bake the dough 8-10 minutes. Then (to stop the growth of the dough) put it on the grill and bake for another 10min. Get the pan with the dough and remove the grille. Oven temperature increase to 245С. 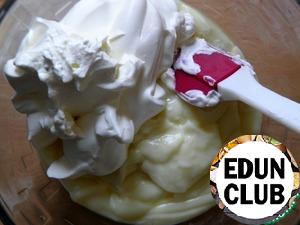 Prepare the cream. Vanilla pod in half lengthwise and take out seeds. Put in a saucepan with the milk and the pod and seeds. On medium heat bring to a boil. Remove from heat, cover and infuse for one hour, Take out the pod and re-heated milk. Separately, mix the yolks, starch and sugar. A thin stream pour the hot milk, stirring constantly. When the mixture is smooth, return it back into the saucepan. On slow fire bring until thick, continuing to stir with a whisk. Cream wipe through a sieve and parts of the input butter. Need to cool the cream by placing the pot on top of the bigger pan filled with cold water. To cream no film was formed, stir with a whisk. In General, during the preparation of the cream with a whisk do not leave for a long time) the Cream and vanilla seeds whisk until soft peaks form. To shift the cream into a Cup of cold cream and a spatula to mix. Stir gently to get air and gentle cream. Using a pastry bag with a smooth round head otkryvaem a piece of puff pastry, here are the "buttons". Cover with a second piece, again fill with cream and cover with the third layer. Can be served immediately, allow to stand in refrigerator. I liked the second option, the brownie was like "Napoleon")
PS Now one concern - what to do with all the whites left after making cream? While lying in the freezer, waiting...:) East cake
75 - - -
I join in the congratulations Lightyear (swetiksemizwetik). The cakes she has given, well, me - a brownie with walnuts Eclairs
88 - - -
Friends, I offer you another version of the eclairs. We loved these eclecti. Try it, maybe you will like. 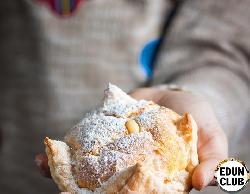 Cake "Leningrad"
66 - - -
They say this cake comes from our childhood. I'm not sure to be honest. But it is quite possible that some of those who tried it will respond and you may prepare... to remember a time when the trees were big, and our country bore the proud name of the USSR. Chocolate cakes with cherries
136 3 40м 8
While it is summer in all the pies trying to put fresh berries. Healthy and delicious food. For all chocolate lovers. Dessert "Three wishes for Cinderella"
177 - - -
Versatile and delicate bouquet of flavors and aromas of the dessert will make You softness and lightness. The name is associated with the fact that it combines the three flavors of walnut, coconut and almond.