And easier to say, braised cabbage with meat sauce from hell. The dish is cheap, because is usually made from the pig's head and pickled cabbage. But a pig's head for me - something exotic :). Offer the option with pork ribs, it is somehow clearer. The highlight of the meal in horseradish sauce (accent on the first syllable, but it all depends on taste :) In the original recipe at the end of quenching is added 1 Cup of white wine. I tried with wine and no, the second option I liked more - without wine. Washed the ribs are put in the pot, fill with water to the top level of the ribs, sprinkle with salt and cook for 30 minutes after boiling.

If the cabbage is very sour, rinse, squeeze and spread on ribs.
The next layer, put coarsely chopped onions, apples.
Throw juniper berries and caraway.
Cover with a lid and stew until ready - there is almost no liquid and the meat should easily separate from the bones. 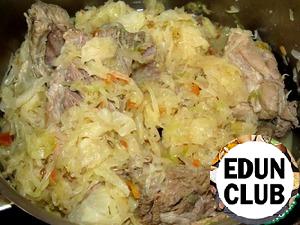 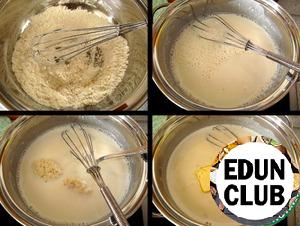 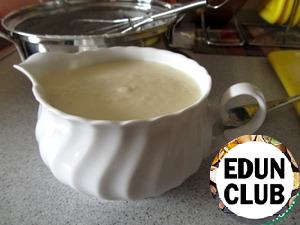 The sauce is ready pour into a gravy boat for serving. While the cabbage is cooked, garnish boil the potatoes. Each pours the sauce in a bowl.

The sauce is pleasantly spicy due to the horseradish, at the same time softens the sour taste of cabbage. Meat baked with kiwi
76 - - -
If your house is having a party or will it be just a family dinner, the meat always comes in handy. And the recipe is absolutely not troublesome, and the result will please. Sausage of pork
59 - - -
Very tasty and juicy sausages. Can prepare for the future and freeze and when needed just take and bake, no defrosting.

Scallops in a creamy garlic marinade
113 - 60м 2
What could be more delicious juicy piece of meat? All lovers of meat. Pork ribs "Orange mood"
80 3 - -
This is again the familiar pork ribs... On the street the sun is shining like spring, Sunny mood.. orange... and ribs so orange... For fans of unusual taste. Meatloaf with chicken liver
126 - 120м 3
Fragrant, tender loaf perfect for any occasion. As a hot dish, or as cutting for the holiday table, You decide. But tasty anyway. Come visit. Nuggets of pork
42 - 30м 4
In fact, the nuggets – a dish of chicken, is well known. But why in the same way as preparing chicken, make nuggets of other kind of meat? Pork tenderloin is quite tender and juicy for this. And most importantly, the nuggets – crispy crust and juicy filling. I took to cooking pork tenderloin spinal – muscle useless, and therefore soft, with virtually no veins. Nuggets were prepared in two ways. I'll describe both, but I confess: the second I liked more. Pork slices with funchoza
93 - 150м 4
When a family has a small playful kids, rarely have time for flights of fancy in the culinary question (at least in my case). But surprise is still desirable. Breaking your head over what to cook from the series: quick, tasty and for the first time I came across packaging funchoza. Bought something for the salad, took less than half. And so was born my idea to put it on the side. The meat is also cooked for themselves in a new way. My family loved it. Put the recipe on your court!
More recipes