Pop-tarts or Pop-Tarts is the name of a popular stuffed biscuits come from the United States. Are two thin crispy layer of dough, between which is enclosed a sweet filling. Fillings can be very diverse, and it's incredibly tasty cookies! Prove is an annual multi-million dollar sales. But for such cookies do not have to go to an American store, its very easy to make at home. And that's not only delicious, but also funny, we'll put it on a stick and will turn out fun treats for the kids. Will show two classic toppings: "Pumpkin pie" and "Cinnamon & brown sugar" To begin, prepare the dough. For pop tortsov stuffed with brown sugar and cinnamon:
In the bowl of a food processor, combine 1 1/2 stack. flour, 1/2 tsp salt, 1 tbsp brown sugar and 1 tsp cinnamon. Add 110 g of butter and whisk until education crumbs. Add 1 egg and a couple tablespoons of ice water. Whisk again until the dough start to gather into lumps. Quickly knead the dough with your hands, form a disk, wrap in plastic and refrigerate for at least 1 hour.
For pop tortsov with pumpkin filling I made the same dough but without the cinnamon. 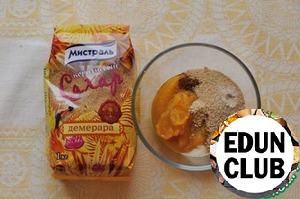 Cookies shenoy stuffing I decided to make a round. Thinly roll out the dough and cut out 16 to 18 circles. Lay half the circles on a baking tray lined with baking paper. Each put a spoonful of sugar toppings and put a wooden stick if you use. Cover with the remaining circles, tightly Zadajte edges and apply a fork pattern around the perimeter. 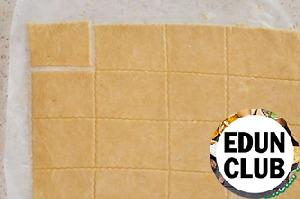 Cookies with pumpkin filling I have a traditional rectangular shape.
Thinly roll out the dough into a rectangle, trim the uneven edges and cut into rectangles 16-18. Lay half the rectangles on a baking tray lined with baking paper. Each put about a tablespoon of pumpkin filling and put a wooden stick if you use. Cover with the remaining rectangles, firmly Zadajte edges and apply a fork pattern around the perimeter. Remove the baking sheet with the pop-Tatsumi in the fridge for 15 minutes. Meanwhile, preheat the oven to 190 gr.
Bake for 20-25 minutes until browned. Cool completely.
For the glaze, mix the powdered sugar with honey and milk. Milk may require a little less or a little more, add 1 tsp. Apply frosting on cookies and sprinkle with candy sprinkles if you wish. Allow the glaze to harden and serve. Chocolate shortbread bagels
136 - 45м 8
In my culinary baggage wonderful dough. Sand, but slightly different from the standard. I bake him cookies, tarts and bagels. Try it, You'll like the bagels. Cookies for slender
115 - 30м 6
If You like oatmeal and You are always on a diet, then you are welcome! When you would like anything delicious and healthy for me these cookies. I must say that my children carry them on their Cheers! Try it and You! Chocolate cookies with peanut butter filling
129 - 30м 24
These cookies can be prepared in advance and put in a box until the New year. Or a nice package and give to friends. Attracts those that are prepared without butter. Recipe from olgalina, but I reduced the sugar by almost half and added an egg. Lenten oatmeal cookies
103 - 35м 1
Homemade cakes are the most delicious, especially that cooked with love! Now, many hold the post, someone can't have sugar (like me) and this baking is an indispensable thing! Orekhovo-rye cookies
185 - 40м 15
Great cookies, despite the simplicity, it was very tasty and very fragrant, a great opportunity to delight yourself concerning dietary cookies without compromising flavor and health! Amazing lean bagels
406 - 30м -
A minimum of cost and effort and time, and the result is a delicious vegetable rolls. Can be done with any filling, what is at hand! In my recipe they are with prunes and plum jam. I did with the dried apricots. My family devoured instantly!!! Biscuits "Shortbread squares with jam"
128 - - -
Very easy to make cookies! Who calls them Viennese biscuits to somebody this recipe is known under the name grated pie... a lot of names, as well as the variety of fillings for this recipe! The filling can be jam, jams and mashed berries... the Result of one, it's very easy and delicious! Biscuits "Nuts" with condensed milk
125 - 60м 60
Very tasty, the recipe I have for a long time. When they do, they like everything, was eating for two cheeks. Very sweet and gentle :) Also very satisfying, this dish is considered as a delicacy :)
More recipes