I have long wanted to put their dumplings and the recipe for my perfect dough for ravioli. But I was scared of "send gotovsya heroy diaries". But in the diaries, not all drop by, and share well, very much with all. Finally found a way out. Saw in the Internet the recipe for the casserole of dumplings (the author said that the recipe from Julia Vysotsky). The recipe is pretty successful. Of those that are quickly prepared in the presence of the dumplings in the fridge. So I decided to use found the recipe in order to share your little secret!

Ingredients for Dumplings, baked with sour cream and herbs

Step by step instruction of cooking Dumplings, baked with sour cream and herbs Add to the minced meat and mix thoroughly. The formed dumplings covered with flour. 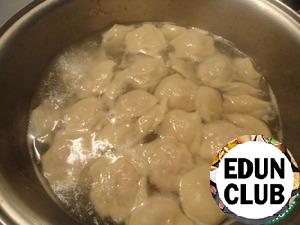 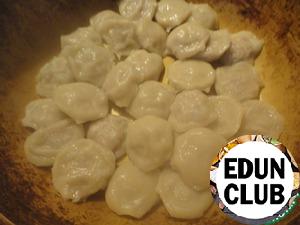 Put the boiled ravioli in the baking dish. 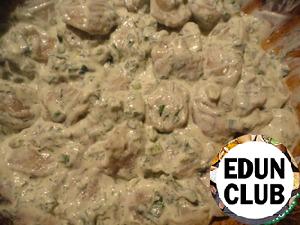 Fill with sour cream with herbs. Cheese grate on a coarse grater. 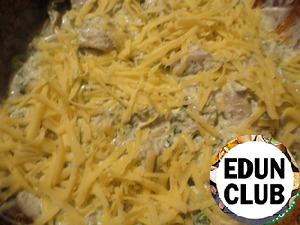 Filling in the dumplings. I even sprinkled with grated Parmesan cheese. 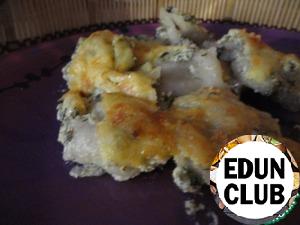 This is a very tasty and satisfying. Breakfast - all perfect! 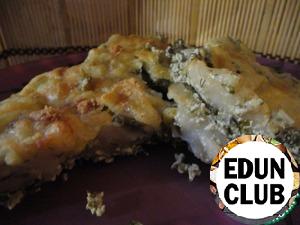 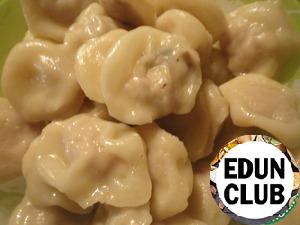 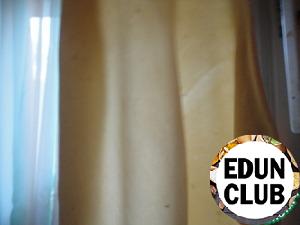 And the dough for them! China - the birthplace of dumplings. The Chinese have raznoobraznoe amount recipes such as stuffing and dough for dumplings. The dough for Chinese dumplings has a large number of ingredients, but they always include a starch. Leading strongly encouraged to add to the dough starch at the rate of 1 tablespoon per Cup of flour, to assess what happens. I tried it and was ecstatic! In my experience, that lack 3 tablespoons for 500 grams of flour (about 4 cups), but if with starch to overdo it, the dumplings will be soft after boiling when cooking.

So knead the dough from 300 ml of water, 500 g flour, 1 tsp salt and 3 tbsp corn starch. Put in the fridge for 15 minutes so that the flour gave gluten. In the first photo of the dough to the refrigerator, the second - after. It is clearly seen that it has become more smooth. And the starch made it incredibly plastic! 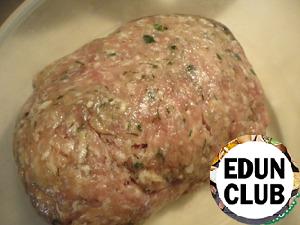 Now for the meat. I have his signature minced chicken, beef and pork with onions, garlic and spices. Here I have laid out: http://www.povarenok .ru/recipes/show/603 42/ (for some reason when you save the recipe in the link appears a few spaces if you want to see "beat" them) manually. Maybe someone come in handy. In General, You can prepare your favorite stuffing. Once my little stated that store-bought ravioli tastes better because my meat "solid". She meant that the meat is too dense, and she wanted meat filling was more loose. I turned my brains and found out - the same starch. In 100 ml of cold water (preferably milk) dissolve 1 tablespoon of starch. Crispy fried dumplings
72 - 10м 1
You know what? I suggest to fry pelmeni without water :) such variation is not, therefore, be placed :) Langosy
185 4 30м -
This dish in the Czech Republic sold on the street along with hamburgers and hot dogs. Very like the little boy in both salt and sweet version. Fish dumplings "Gyoza style"
74 - 100м 3
Fusion fish dumplings gyoza style. In this recipe have tried to connect the fish dumplings, which I tried in a good Russian restaurant in Moscow, with the method of Japanese cooking gios. A little experiment with the dough, making it more Asian. It was very tasty. Manta rays in Uzbek
85 3 50м 4
My recipe is not original. Like on the website there. Well, it's very tasty, so I wanted to share with You. My parents often visited in Central Asia, where for the first time and tried this dish. To cook dumplings is my dream since childhood. And realized it just now when I bought the steamer. The recipe I took from the book "Kitchen of the Soviet peoples" (so that's drevenica). Do not judge strictly, this is my third time. Over time, I think, will be more beautiful. Colored Chinese dumplings
73 - - -
It just so happened that the New year, we will celebrate two times... soon will come Old New year... Traditional Russian divination on the Old New year, is considered to be guessing on the dumplings... or rather in a variety of toppings ( salt, pepper, dill, peas, sugar...) But the third time to celebrate New year, Chinese lunar calendar... which will come on January 31. In China during this period, almost every family makes dumplings. Variants of Chinese dumplings very much, lots of different toppings, types of dough and ways of cooking. I suggest one of the options... Assuming that such colored dumplings perfectly decorate the holiday table. Dumplings with meat and cabbage
64 4 60м -
Recipe found on an old postcard 1987. And, of course, immediately went to cook. And no wonder, it turned out so delicious, just a fairy tale. PS the dumplings prepared the first time! "Homemade Dumplings"
74 3 50м 10
Now on sale a large variety of dumplings, hinkaley, dumplings, manta rays, etc. But there is nothing better and tastier than homemade dumplings!