This great appetizer will be a wonderful alternative to store-bought meats, and no dyes, fragrances, flavours and enhancers such chemistry! Hearty and very tasty! Try it!

Ingredients for Terrine of pork shank

Step by step instruction of cooking Terrine of pork shank 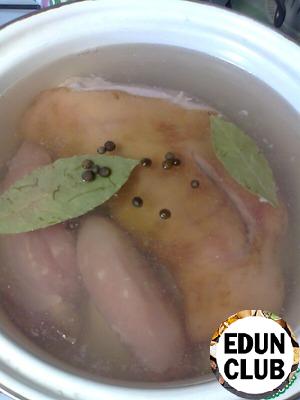 Shank clean, and well my together with chicken breast set on fire. When it boils, remove the foam and add salt, pepper, Bay leaf, reduce the heat (I cook on the plate) and cook for 3-4 hours. Knuckle cooked leave to cool in the broth to warm. Get the shank out of the broth, remove the bones and meat razbiram into pieces (not very small). Leave the skin whole. Greens grind. Olives can be put, and can be cut in half. Meat, greens, olives and 2 cloves of garlic (skip through the press) to gently stir. Want poetry and pepper. 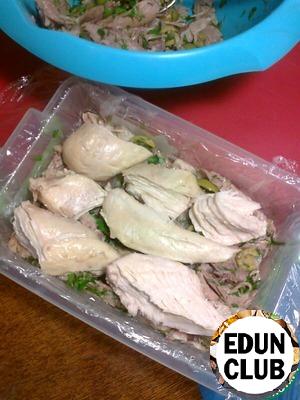 Form soak water (for a better fit of the film) and line a rimmed cling film (the edges of the film should hang down). The film will spread out the pork skin. The meat mixture is spread on the skin to half. Then I put a layer of chicken meat from breast, then more meat mixture. 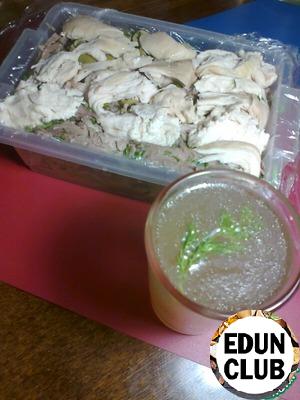 I did two layers of meat from the shank and two layers of white chicken meat. In a Cup of broth breed instant gelatin (if normal, it is preparing a gelatin solution in accordance with the instructions on the package).

Pour the meat broth gelatin, in several places, is pierced with a knife (to our broth was distributed evenly), gently sealing the meat tablespoon, if necessary, add more gelatin broth (the liquid just appeared on the surface of the meat).

Close the terrine hanging from the shaped ends of the film and put in the refrigerator for 8-10 hours (I set at night). Frozen, remove the terrine from the mold, remove the foil, cut into pieces. Very tasty with bread and mustard or horseradish as you like! Bon appetit! Meat baskets with vegetables and sauce "Bechamel"
107 - - 10
Little baskets of minced meat stuffed with vegetables. I often use the frozen mixture in the cooking, so this recipe took a"Mexican blend". Get little, tasty baskets, which are well served as an appetizer. Charcuterie "Light"
92 - 10м 2
This recipe found my mother on the Internet. Was first prepared for the New year and it has paid off! Men love it! And again, step-by-step photos no, all too easy. Steak in Ukrainian
100 - 60м -
Dish of the Northern peoples of Russia. Mostly prepared of fish. As well as meat, mostly venison. In our family, cook the slices of beef on all the big holidays, like a wedding. The recipe was passed to me from my aunt, for what it huge gratitude. Try this wonderful recipe. Fat with a meat layer onion skins
105 - 45м 10
I love bacon in all its forms and think I am not alone.)) The fat in onion skins boiled. Due to peel onions, the bacon gets smoked color and unusual taste. I advise you to try.