Imperceptibly approached another anniversary. It has become a tradition that my jubilee recipes are always soups, as happened with the hundredth recipe. Today is my 400-hundredth recipe on the website. And this is my HUNDREDTH soup. Here's a double anniversary!!! When the streets were chilly, so this soup really love to order regulars of the British pubs. Very warming and hearty soup. By the way, alcohol is barely felt, only makes a soup very spicy touch. However, buying in Arkhangelsk English ale is very problematic, so the soup is light beer TUBORG. The broth I made from scraps and leftovers from the chicken, adding 1 onion and 1 sliced carrot and muttered. To prepare the products. Wash the vegetables and peel. Instead of the onion bulbs I picked leeks. Pasternak we are very exotic, so, too, replaced - on a piece of celery. Cut all the vegetables into medium-sized slices. 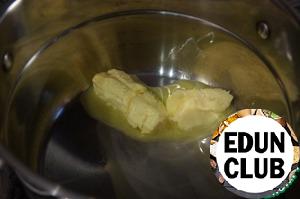 In a large saucepan with a thick bottom to heat the butter. Add the carrots and celery and sauté for 3 minutes. Add the other vegetables and fry over medium heat, stirring occasionally, another 7 minutes. Add the flour and mustard powder and fry, stirring, another 3 minutes. Pour in hot broth and beer, each time stirring the soup to avoid lumps. 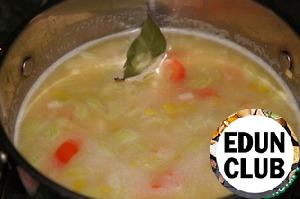 Add Bay leaf and cook under cover on low heat for 15 minutes. 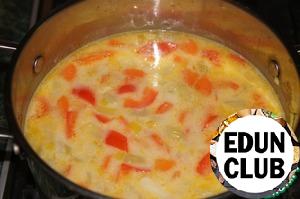 After the time to remove the Bay leaf, pour in soup cream, bring to a boil. 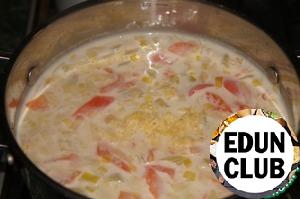 And add cheese. Season with salt to taste. To cook soup, stirring occasionally and not letting it boil, until the cheese is completely melted. Turn off the heat, add the chopped garlic, cover the pan with a lid and infuse the soup for 10 minutes. 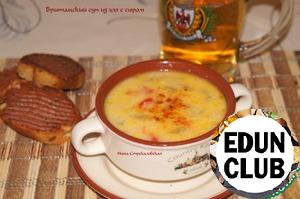 The soup is served with black bread and beer. But it will be much more interesting and tastier if you cook soup, toast with pate. The bread is cut, dried in the toaster, spread with paste and put under the grill for a few minutes. Soup "Child"
87 - 30м 4
Friends, I propose a simple recipe! This will be a wonderful dinner! After all these soups we always come to the rescue! With the huge success of their children eat! Easy, rice, so bright! Bow in it, pepper is very sweet! And the potatoes, of course! Very tasty, perfect! Vegetable soup with rice and Apple
72 - 20м 3
Soup from the "quick and tasty". Apple was a great addition to this soup. Apples are often added to soups, soup and borscht. Try it!!! Those who do not like it in soups, don't tell. Apple can just grate, not cut pieces. Soup "the Kiss of the Snow Queen"
60 5 40м 4
Very light cheese and vegetable soup, another rescue for our bloated tummies... I somehow associated with the Snow Queen... ... the combination of cauliflower, green beans, carrots and potatoes in the framing of the cheese soup... mmm... Kai would just immediately heart melted!!!! Chicken soup with rice
64 - 60м 4
This soup of chicken You certainly not tried! Very flavorful, unique and delicious - he's a nice variety to Your daily menu. Will appeal to both adults and children. Also, it is high in calories. Green soup with mushrooms
168 - - -
Green borscht can be prepared and lean. For this, the meat can be replaced with mushrooms instead of eggs, add a little cauliflower.
More recipes