The perfect recipe for those who can't bake or doesn't like, or just no free time. Simple, quick, simple. The result is always delicious. Can not go wrong, to spoil anything. Very tasty, very juicy and tender. About calories this time I say nothing :). Sometimes you can afford. After experimenting the other day with a gorgeous pastries to our chefs, I, unfortunately, stated that, apparently, nothing. And so I decided to apply to its win-win version of the cake.

This recipe rescued me more than once, when it was itself something quick to whip up for dessert. So I bought the groceries, cooked and decided to post on the website.

Thought who have similar problems with cakes, the recipe will definitely come in handy. The sour cream put into a deep bowl or in a saucepan and beat with a mixer for two minutes. Then add sugar and beat further until complete dissolution of sugar. By the time it will take about five minutes.

On the pictures you can see that I added a cane, but this is entirely optional. Just bought a case competition, and participate of something of inspiration there. 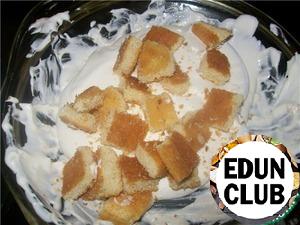 In a separate bowl put a few tablespoons of sour cream, a handful of biscuit cubes, mix gently, trying not to turn everything to mush. 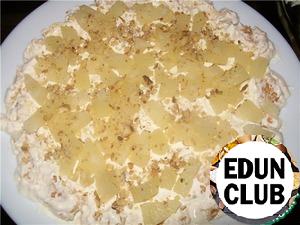 Until such is the snowdrift. The remaining sour cream to lubricate the edges. And the final touch. Melt chocolate in the microwave and pour on top of the cake. Everything is ready, but has not yet. It needs to stand for at least three hours in the refrigerator. I usually cook late in the evening before bed and put in the fridge. Autumn lace
60 4 30м 16
Very often cook this cake. It is economical, and most importantly delicious. Every time for decoration use different stencils, but this time decided to do with lace. For competition "School time" Cake cookies "Whim"
61 3 20м -
A delicious cake that is prepared quickly in the evening cooked, then overnight in the fridge and in the morning you can enjoy! Preparing for the New Year! Strawberry cake with mint soufflé
83 4 - -
Delicate delicious cake without baking, melting in the mouth, with a mild taste of refreshing mint and sweet berries. Lazy cake "Napoleon"
64 - - -
This recipe is from the series - "I want something tasty, but for a long time to Tinker in the kitchen have no desire." Then this recipe is for you. More easy and quick recipe I've ever seen. And most importantly bake nothing. The only drawback to this cake - it needs to soak for a few hours and then quickly eaten.

Cake in haste
49 5 20м -
A simple and delicious cake. Not very expensive and easy to prepare. Cake "Cookies from childhood"
108 4.5 60м 12
Cake without baking of the beloved "Jubilee " cookie, but not the traditional, and crimson. Done quickly, it turns out very gently, like "pigeon milk".