Delicious chocolate cake unusual shape is simply prepared. A recipe from the Internet. Separate eggs into whites and yolks.
Make the dough.
In a bowl put the egg yolks, add to them the sugar, the sifted flour with cocoa. A little stir. RUB with a spoon until smooth. In a separate bowl whisk the whites in a lush white mass. To the dough add 3 tbsp of beaten egg whites and carefully stir the dough. 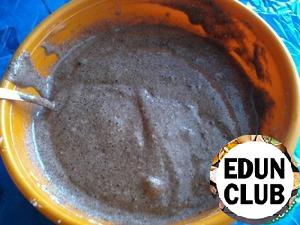 Then add the remaining whites and carefully mix up them into the dough. The dough pour into a form with baking paper (the walls of oil and Pripyat flour). Cake bake in preheated oven at 180град. approximately 25-30 min. Readiness test trees. wand. Hot cake immediately put on a towel. In the middle of the biscuit to put the rolling pin (I put a roll of baking paper). And gently fold the biscuit in half. 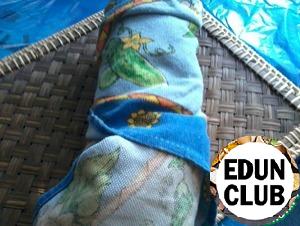 Cake to keep in shape, I wrapped it for 30 minutes in a towel. Half an hour later the towel with cake was removed and, while the cake cools down ( approximately 1 hour at the window), cooked cream.
Soft butter room. temperature slightly beat with a mixer, then add condensed milk and beat until a homogeneous dense mass. Ready cream put in the refrigerator for about 1 hour (I kept 30 min). To assemble the cake.
Remove the rolling pin from the cake. Korzh grease cream, deepening of the rolling pin to put a banana on top of another cream. And gently fold the cake in the form of a Crescent. 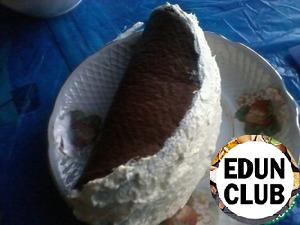 One side of the cake grease remaining cream. One side of the cake sprinkle with nuts and put the cake for at least a couple of hours in the fridge. Spanish Apple pie
59 - 90м 6
Original Apple pie with apples, almonds, cinnamon and rum. Simple to prepare, but original, beautiful, fragrant and delicious dessert for any occasion. The cake turns out very tender, it is not dry, it literally melts in your mouth. Recipe and razrezik here! Pecan pie with lime and coconut
54 - 60м 6
As this is a favorite pie of my husband, I bake quite often. The cake is very delicate, airy, with an interesting lime glaze green color, is easy to prepare and always turns out. Households will resort to you in the kitchen, attracted by its magical aroma. A piece of this delicious cake with a Cup of coffee will make your day. Recipe from Nina Tarasova, and this means that the furnace must!. Cake "Hat of Santa Claus"
92 - - -
On new year's table always flaunt the most delicious, original and favorite dishes. So you want to surprise your guests and loved ones! Prepare this cake for my recipe. You will not regret! All will love it! Cake "Sacher"
104 - - -
Sacher cake (Sachertorte) is a chocolate cake, by far the most well-known and appreciated in the world. This chocolate elegance, one of the traditions in Austria, was born thanks to a 16-year-old apprentice to pastry chef Franz Zaharu (Franz Sacher) in 1832. The story says that a young Franz, replacing the day of the sick, the chef had to prepare dessert for the gourmet Prince Von Mitternich Winnesburg. Hesitation, he decided to combine a simple, traditional ingredients such as chocolate and jam, having a sweet and pleasant dessert. The cake was a huge success, learned about it around the world. Thousands of people continue to cook it, but this recipe is jealously kept in Vienna. It can be ordered by mail, but if this is not possible, please come to me. Let not the original, but I assure you, very tasty!!!
More recipes