When I was a child I read the book. It was in Italy. There was a blind boy who wanted to "see" sea. He was from a poor family. I trained there a mess of pottage. It was their main food. I thought that the mess of pottage - that sucks... for the poor : ( How wrong I was!!! Lentil soup is the most delicious thing in the world :))) Actually, lentils - amazing product!!!

Ingredients for Frankfurt mess of pottage

Step by step instruction of cooking Frankfurt mess of pottage To prepare the vegetable broth. I cooked a half portion. In boiling vegetable broth, add the lentils and cook for 20 minutes over low heat, frequently skimming off the foam. 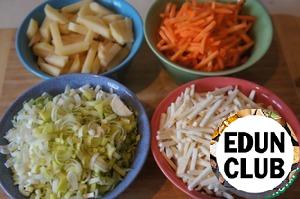 Fry carrots and celery in vegetable oil until soft. 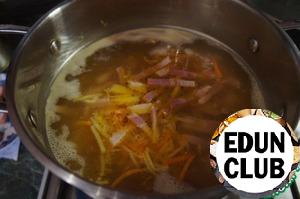 After 20 minutes the lentils and pour in the soup, the potatoes, bring to a boil and cook over low heat for 10 minutes. Add to the soup zazharku with the bacon, season with salt, cook for 10 minutes. 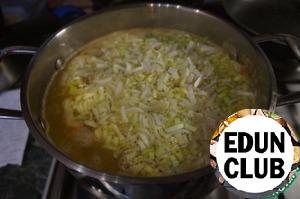 Pour in the soup sausages, add the leeks and marjoram leaves, cook for 3 minutes. 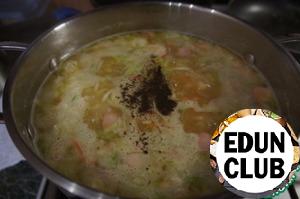 Season the soup with pepper, pour the vinegar and stir. Pea soup with pesto
121 - 80м 3
Hearty and delicious split pea soup with vegetables, pesto and cheese. To the soup, I suggest to cook garlic croutons. Soup with beans "Quickly"
42 - 30м 6
On new year's day we will definitely look guests, dear to our heart. And no, we don't stop talking with them, not to get enough of their grandchildren and their successes, and if we haven't seen for years, and hands them to us not to let go would be, it would have looked in their eyes... But also to feed necessary, but want delicious and hearty, profitably and quickly to cook. The revenue we receive products from TM Yoko, you only need to buy a few jars. The red lentil soup with vegetables
56 - 25м -
Delicious, easy, hearty, healthy soup. Perfectly diversifies the menu during the Great lent. Recipe found on one of the sites. Tried, I liked it. Is prepared easily and very quickly. The Scullion did not find, therefore, ventured to add the recipe. Pea soup with croutons of steamers
65 - 75м 3
Continue the topic of healthy eating. I can assure all the skeptics that the soup of the steamer turned out no worse than cooked in the usual way.
More recipes