Versions of the origin of this dish quite a lot, but there is one, in my opinion, more reliable and best way of interpreting the name. The order of the Holy spirit was taken 100 members of the noblest families of France. The insignia that was worn on a blue ribbon displays the dove, hovering in the background of the Maltese cross. And these same Cavaliers of the Order were famous for magnificent feasts and luxurious dinners. The people, after the French revolution, was awarded the title of any luxurious dish called "cordon Bleu", as a sign of quality recipes. In these days more famous schnitzel called "cordon Bleu", of chipped veal or beef tenderloin stuffed with cheese and ham, breaded in bread crumbs. Meat you can use any, personally, I liked the chicken breast: gently and not too hard to stomach. Cheese, ideally, you need to take the Swiss. But after experimenting with different varieties of cheese, more like icing - it does not follow from the schnitzel, however, is slightly melted. To prepare you need the chicken fillet, ham, cheese (ideally Swiss, but I have a Maasdam), milk (you can substitute any cream with fat content 20%), soy sauce, egg, breadcrumbs, salt and pepper to taste. Chicken fillet cut along not to the end, deploy and recapture. Discourage using plastic wrap or plastic bag to the tender chicken meat is not torn. To poperchit to taste, pour soy sauce. leave to marinate for 40 minutes. 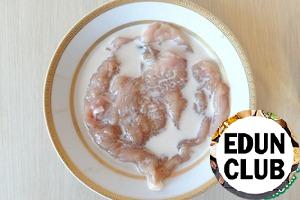 Not washing the soy sauce to marinate the meat in milk for 40 minutes. 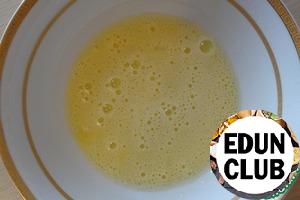 To breaded schnitzel in the breadcrumbs. Again breaded in breadcrumbs. Put on a Board or plate and send in the freezer for 20-30 minutes. The breading needs a little freeze, but not freeze. Heat the oil. Fry the schnitzels on both sides until Golden brown. Put on plate and serve immediately while hot. Very well with any side dish, though without a side dish quite hearty and delicious. Bon appetit! Chicken fillet fried in sesame
56 - 10м 4
The basic idea of the recipe - fast and delicious. Chicken fried literally for a few minutes on each side. With this method of cooking is very appropriate to use a pre-roasted sesame seeds. Such a small thing will make the dish much tastier. Curry chicken with autumn vegetables
57 - - -
Autumn... Chilly evenings, rain, sleet. So you want to keep warm. This will help curry dish with Oriental motifs and seasonal vegetables cooked in a slow cooker. Chicken Breasts with apples
57 - - -
No need to wait for a special occasion to cook these Breasts. Delicious and juicy, they are great for dinner on weekdays or a great treat during the holidays.