A dish for those who like to cook in the cauldron. Frankly, this dish with the same name in the Uzbek cuisine. But Kazan-kabob was the starting point for this dish. To say that it is delicious - nothing to say. This amazingly delicious dish!

Ingredients for Kazan-kabob with cabbage

Step by step instruction of cooking Kazan-kabob with cabbage So, put the cauldron on the fire and pour oil. Potatoes clean, wash (an egg - it can be fried whole, and, in my opinion, it tastes better). But if the potatoes are large, then its best to cut it into large pieces.

So, throw the potatoes in a large kettle, add salt and fry it until Golden brown color, then take out the potatoes and put in a separate dishes, let him wait his turn. Meat - I took not too fatty beef (fillet) - cut into big pieces and fry in pot until brown. 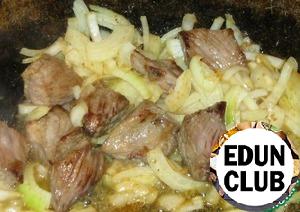 Onion shinkuem semicircles and throw in the fried meat. Tormented with meat until onion is transparent. Throw cumin, salt. Tomato paste and half a Cup of water poured into the cauldron (the liquid should cover the meat, if the liquid is too little to add). Simmer the meat in the tomato sauce for 20 minutes under closed lid on small fire. Cabbage shinkuem, pour into the cauldron. Stir, add salt. And parched in a pot until the cabbage is not settled. Cabbage has settled, we can add our fried potatoes. Carefully stir. Tightly close the lid and leave to languish on low heat for 20-25 minutes. After simmering the lid open and sprinkle liberally our dish of greens (celery, parsley, cilantro, dill, green onions and garlic). Gently stir, cover. Turn off the fire. Give the dish just stand and soak up the aromas of greenery 5 minutes. Elahi Bakhsh
312 4 - 10
Wonderful pilaf created by Bukharian Jews, "edited" the Elder hankishieva. Found again in the book "Kazan, Mangal and other male pleasure". The dish that makes the stomach dimensionless... Salt eggplant with noodles and vegetables
195 - - -
I love eggplant, though every day let! I have a billet of them - salty. After cooking they are similar in structure to the mushrooms, but the taste of your preserve. I dried them on a string, like mushrooms, is now nowhere, so salt. The dish turns out on the topic of Uighur cuisine. Help yourself! Beef in sour cream
74 - 250м 20
I was in a spring mood))) Beef in sour cream instead of land with grass, heart rice, honey carrot and cucumber flower))) Son gobbled up quickly for such a lovely dinner)) Beef in sour cream is my dad's signature dish. The recipe I took from him. Although this dish is cooked for a long time, believe me, the result is worth it. Very tasty and satisfying. The beef turns out very tender. Muli
330 - 100м -
Muli - common in Moldova the dish. Served as the latest hot at various celebrations. Very tasty and easy dish. Also this dish can be ordered in any Moldovan restaurant. Let's start... Mushrooms, stewed in sour cream
57 - 60м 6
For those who like mushrooms!

Pilaf in Uzbek and variations
54 3 120м 10
As a child I was the babysitter-the Uzbek, who taught my mother to cook rice. In turn, my mom told me the recipe which I want to share. This is a classic recipe of Uzbek pilaf do. The staff gave me the cauldron at 8 liters, and now the pilaf I cooked not only at home but also at the campfire at the cottage. It turns out perfect anyway. Kebab-Rohan
97 - 120м 4
The barbecue, baked in the coals of fish, rice in a pot is already familiar dishes which do not manage the may meeting in the open air. I suggest to try something "new." For example, kabob-Rogan – very tasty and simple dish which can be cooked in a cauldron outdoors. We cooked on the recipe of the Elder hankishieva.
More recipes