This recipe is from the recipe book to my first, now defunct at the bothie, the bread maker. But I like it so much that I bake it constantly and in the second bread maker. For those who do not have this device, I'll write about how to bake in a conventional oven. In my breadmaker according to the instructions laid out liquid first, then solid ingredients. In a bowl breadmaker pour in milk, beat eggs. Butter (margarine or spread) cut in small pieces and throw in the bread. Add the flour and yeast. Almonds triturated in a mortar. 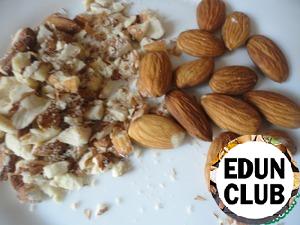 In my breadmaker this "miracle hostile technology," as an automatic dispenser. On the one hand it filled there are all sorts of additives (nuts, raisins, minced garlic, etc.). 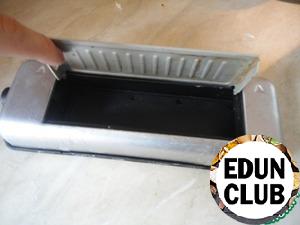 And on the other hand "door" through which all these supplements into the dough 20 minutes after the start of the batch. There has been filled with dispenser raisins, and almonds. The finished cake to cool on rack at least 30 minutes. However, the smell in the apartment is such that this half hour and my house was hard to endure. And you can cut and serve for tea!

The cupcake tastes very soft, buttery, moderately sweet. Unfortunately, due to the fact that they cut warm, the structure of the bread a little hurt, and it did not cut smoothly, but all the same- very tasty! Cupcakes "Belochkina joy"
130 5 - -
You probably think that these muffins with nuts? And here and there,but to taste everything and think.Crumbly and fragrant!!! The name given the daughter,so I decided that the squirrels they very much liked. Thanks for the inspiration Ludmilochka ,as the idea of cupcakes was born after her delicious livers of sunflower seeds Cupcake "sunbeams"
109 - 70м -
Here's synecdochically recipe cake suddenly came to my mind. And I liked the combination of flavors... and a touch of oat test, which is spivaetsya cranberry melody, solo and banana, soaked in caramel... separately can be said about the aroma that fills the house... well, to each boy a piece I wrapped, try it!.. "Marble" cupcake of pumpkin and chocolate
122 4 120м 17
I had to use pumpkin. I searched on the Internet. Found the recipe "marble" cake pan from Nelly. Thank her for the recipe, the cake is eaten instantly. 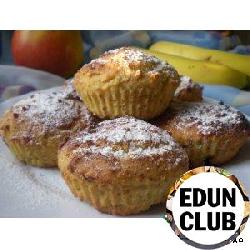 Cheese-corn muffins with fruits
102 - 50м 18
I really like baking, in which there are several types of flour. Cheese is one of my favorite products. And the fruit... what are we without the fruit! Here together in this recipe to all my addictions. Turned out soft, fragrant muffins - delicious and healthy! I thank the author of the Cherry for the idea. Muffins with raisins and peanut strasheim
115 - - -
Very elegant muffins turn out so strasheim. And of course very tasty. I advise everyone to cook this yummy tea. Cupcake "Mr. Dried Fruit"
94 - 40м 6
For Christmas many bake cupcakes. Here I propose my own option. A delicious cupcake! Appeal especially to those who loves dried fruit! Lenten cake of green buckwheat
67 - 60м 6
Healthy and tasty alternative to the classic cupcake. Corn flour can be replaced by any other sugar any other sweetener, and lemon juice - 1 tbsp Apple cider vinegar. Optionally, you can add the vanilla sugar. Instead of raisins you can add other dried fruits or nuts.