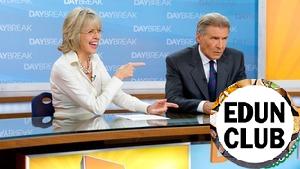 Friends, the weekend is coming and maybe someone will need a great Frittata recipe for the upcoming weekend. Scrambled eggs, you say, how interesting. Yes, eggs, but not simple, but with vegetables and baked in the oven, but the main highlight of this dish, cooks it to incomparable, brutal, charismatic, and just a cool Harrison Ford in a hilarious Comedy "Good morning". If You missed this movie, then let a few words about him. A young employee takes a job in a third-morning show, which she is trying to revive. To this end, it invites to a role with a leading known political journalist Mike Pomeroy is having, played by Harrison Ford. Paired with former beauty Queen Diane Keaton, whose bad character and high ambitions, Pomeroy needs to tell empty news. Between the characters ignite serious conflicts and fights, meanwhile, the morning show starts to gain momentum. Harrison Ford twice in the film makes a Frittata, and both times, it was his personal way to apologize. The film is light, fun, very homey. If You have an extra hour, arrange a family movie, not forgetting to prepare for Breakfast this wonderful Italian recipe. To create an Italian-style Breakfast we will need to cut the leek into rings. In olive oil fry the red bell pepper. I was frozen, I previously got from the refrigerator 10 minutes before preparation. In a large bowl mix the eggs, greens, I had cilantro, but parsley or dill, and Parmesan. Add salt to taste and pepper. We need high-temperature frying pan, which we can send in the oven. Olive oil and slightly fry the leeks, add slices of tomatoes and pepper. 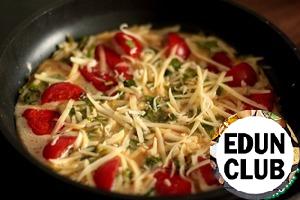 Pour the egg mixture on top and add more Parmesan. Immediately bring the Frittata in a preheated 170 degree oven for 10 minutes. Stuffed eggs with ham and greens
0.6k - 20м -
A delicious appetizer for the holiday table! Or even on holiday, but just so)) Delicate patties of eggs
384 - - -
How many are there egg recipes..... different, delicious! Offer another recipe, original in its delivery. These chops turn out very tender and nutritious, try it! Your family and friends will be pleasantly surprised! Easter pickled eggs
0.6k - 20м 5
Dear cooks, today is only Friday and you may well be ready for the Easter table original, spicy, colorful appetizer - pickled eggs in beet juice. Scrambled eggs with bacon on a steam bath
408 - - -
An unusual variant of all the familiar scrambled eggs. Marinated egg yolks
0.6k - 480м 1
With frozen egg yolks have already many familiar and tried that. I suggest to try a snack from Asuka Simoni, owner of the Japanese bar. This appetizer is served with sake. But just with rice which is delicious and unusual. A simple and unusual dish.
More recipes