Option Christmas. This cake definitely needs to be repeated and on the last day of the year: he was delicate, tasty, easy to prepare, and this new year!

Ingredients for The Geneva cheese cake

Step by step instruction of cooking The Geneva cheese cake 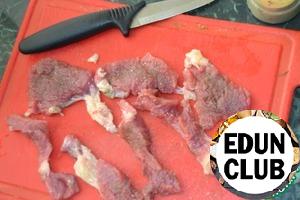 For the background I have found in the newspaper a recipe from the chef of a Moscow restaurant.

1. Meat is better to choose a nicer, preferably a tenderloin of beef, I got beef - marinade for one hour in soy sauce.
(A nod to the authors of contest: composition of the sauce is surprising for its brevity, only water, soybeans, wheat and salt).
After the meat dry with a paper towel, cut into thin pieces. Salt, pepper. 2. Salt, pepper to taste. Fry until soft. Cut into strips.
3. Cut the onion in small cubes and fry in vegetable oil. 4. Cheese RUB on a medium grater. The original recipe used equally Cheddar cheese and Emmental. They can be replaced by any semi-solid variety. The main thing - the bright color and flavor.
After mix the onion, cheeses and meats. 5. Puff pastry we roll out. People are advised to move with a rolling pin in one direction, so the cake promises to be lush.
On my form it took half of a pack of 250 grams of dough. The form is pre-oiled. Spread the filling. 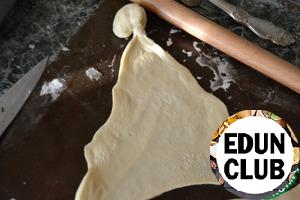 7. Remaining dough lightly fingers turn into a hat and beard. Rolled out dough cut into two triangles. The top ends of the first ball-bombonica. The second triangle is narrow at the top. We cut the ends with kitchen scissors. 8. Shift our "props" for a pie. Above the beard, put the ball is the nose. "Cheeks" stabbed with a fork so that Santa Claus is not swollen. Eyes made of olives. Smeared with beaten egg. 9. Over these brown eyes poyavytsya the surprised eyebrows of dill. This Santa learned that he will rumanetsa in the oven for 20 minutes! (temperature: 180 degrees for the oven fan to normal - 200 degrees). 10. This, in fact, to stay. And you can try to make the sauce. While Santa Claus "tans" cook that cooks is called a "fat onion". Butter put into the pan, once it begins to boil, gradually add flour, constantly stirring it with a spoon. Should be a little crumbly lumps. 11. The mixture was deferred. In a saucepan mix 1 teaspoon of soy sauce and cream. 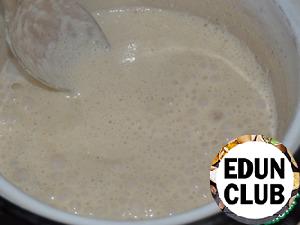 Sauce Worcester I was in Astrakhan was not found. If you have - add one tablespoon fragrant. This mix bring to the boil. When boiling, add fat onion, consistency should be sauce. Meanwhile, the prescribed 20 minutes, came to an end. Pierce a wooden skewer cake Santa Claus shows tomato and a language all its eaters. Pie chocolate cheesecake with apricots
135 - 40м 8
Easy to implement, quite pleasant to the taste of the pie. Christmas cake
133 - 40м 8
For the cake I used the dough that was prepared for cookie piparkook. The filling is very tasty! Whipped egg whites and cheese paste. Pie baked 25th for Christmas and 6 years on the Cook. Pie "General star"
146 - 180м 8
This dish will become the main decoration of your holiday table by 23 February! A cake in the shape of a star will be the main gift to your men! Pistachio tart with caramelized banana
101 - - -
Recently tried out a new recipe. Stole Helen from LJ. The original had no bananas, and peaches. But what happened just beyond words - it's VERY, just incredibly delicious!!! The basis of the tart was for me a revelation – for the sweet fillings better option I have not yet baked! In my opinion, and biscuits for cheesecake bases of such a test will be most welcome. The filling is just a firework of tastes! And nutty and tender and fruity! In General, I recommend to everyone! Pies in Moscow
224 - 120м 8
Pies – baked pies with a hole at the top. Prepare a dish of dough with various fillings. The name pie has received from a seam on the finished cakes, which stretches like a pie. Pies, the recipe of which was very popular in Russia, are still a favorite dish of the Russians. The most common recipes of this delicacy are: pies with meat, pies with fish and pies with cabbage. Charlotte "Guest on the threshold"
123 - 75м 12
Delicate, delicious Apple pie in an unusual performance. This recipe is assembled in the "Relish" a couple of years ago, and she became a frequent guest in our house. Cooked very quickly, and the result is delightful.=)) Carrot cake with hazelnut cream "Winter Wonderland"
138 - - -
This is my first experience cooking vegetarian recipes. The cake has no butter, no eggs, but despite all this pie its taste will not yield skoromniy pies and quite worthy of the holiday table.
More recipes