Potatoes with soy sauce "one and done" Every housewife in the New Year trying to cook a variety of delicious salads, appetizers and definitely crown a hot meat dish. But to bother with the garnish, as a rule, no! Usually stay on mashed potatoes. Relatively quick, tasty and not troublesome. I suggest another potato side dish, which, first, requires much labor, and secondly, it turns out very tasty, tender and delicious. Come and help yourself!

Ingredients for Potatoes with soy sauce "one and done" 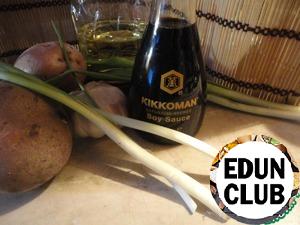 To prepare this side dish takes very little ingredients and time. Potatoes, fill with boiling water (boiling water will create on the surface of potato starch "crust" that will leave all the flavor inside the potatoes), bring to the boil and cover with a lid and cook on low heat for 10 minutes. DO NOT ADD SALT! First, in the recipe there is soy sauce, which is salty, and second, salt makes the potato density. So if we want to crisp the potatoes, it is necessary to add salt at the end of cooking. But jacket potatoes for salads should be boiled in salted water to potatoes was dense and crumbled when cutting. 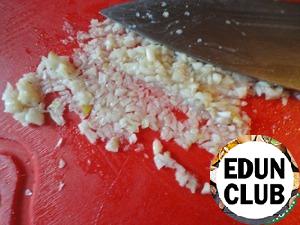 While the potato is cooking, grind the garlic with the salt. In vegetable oil, add soy sauce Kikkoman. Generally when you buy soy sauce is never needed to save. Cheap substitutes contain a lot of chemicals, but the natural soy sauce - extremely useful product. The use of soy sauce is the high content of amino acids. On the effectiveness of antioxidants, soy sauce superior to almost 150 times all citrus fruits are enriched with vitamin C. Use of natural soy sauce improves blood circulation by 50%, slows the development of heart disease and a preventive effect on the entire body. Kikkoman soy sauce is prepared in the traditional method of natural fermentation and has all the above useful properties. 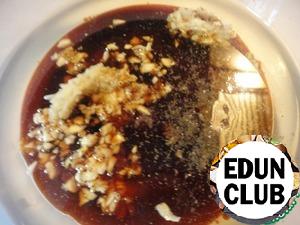 There add the garlic and freshly ground black pepper. 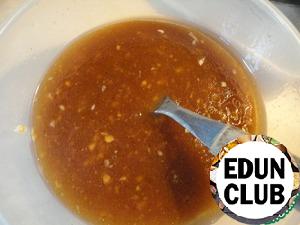 All good whisk with a fork until emulsified. Meanwhile the potatoes are boiling. Throws it in a colander. Our family celebrates New Year at home, just the three of us. So the potatoes we need. But for a large company "dose" can be increased. In principle, in this form, potatoes can be set aside before the time "H". Anything with her in this form will not. And for about 20 minutes before serving and we will bake it in the oven. So, when the hour "H" spread the potatoes on the laid parchment baking sheet. If we have a big bunch of potatoes, then take two baking sheets. In principle, the specified amount of soy fill I was preparing and 700 g of potatoes, and he also was placed on one tray, only denser. I.e. two baking trays with about 1.5 kg of potatoes with double "dose" of the fill is quite possible to prepare. Bake one tray at once, and the second put it in the oven when the first dish of potatoes already on the table. While updatesa first dish - the second coming. Pour potato emulsion of soy sauce, vegetable oil, garlic and pepper. And bake it in the oven at 180-200 degrees for 15-20 minutes. While the potatoes are baking, finely chop green onions. Take out the finished potatoes from the oven. And spread on a dish, sprinkling with green onions. Now you can bring to the table! Success will be assured, I guarantee you! Potatoes "Golden crust"
161 - 40м 4
Offer to cook a very delicious potato and cheese. Potatoes this recipe turns out with a crispy crust and very tender inside. In the family we often cook, this potato like all members of the family. The side dish is simple but delicious, it is suitable for festive table, and every day! A side dish of baked potatoes
145 3 - -
There's nothing unusual here, but it turns out delicious potatoes. Potato baked with Basil
157 - - -
This baked potato has a very creamy taste, perfectly complemented by the aroma of Basil. Such potatoes can be not only a wonderful side dish, but it is a separate dish. Stewed potatoes with squid
218 - 50м 6
The recipe I got from my mom. She has many years of holidays always prepares a potato, it would seem that the magical recipe. My brother always uletaem her on both cheeks, very tender, rich, juicy and delicious, cooked my mother's own hands. Now I often use this recipe and share with You. The potatoes in the microwave for 10 minutes
143 - 10м 1
The potato side dish, quick cooking Potato Christmas trees
170 - - -
YAY! To us again come the New year! They all start to look delicious and beautiful recipes for new year's table, but what Christmas table without potatoes? Duma, many have his signature recipe for Christmas potatoes, but I will share my. Delicious flavorful side dish will delight your guests.
More recipes