Very tasty, hearty and flavorful combination for cold days. Stew prepared by its technology (the recipe is from "Deli "), so all the pieces in it - Zelenka, juicy, but at the same time, impregnated with flavors and spices. Preparing just.

Ingredients for Stew pork and pumpkin

Step by step instruction of cooking Stew pork and pumpkin In my opinion, is quite substantial and the simple set for winter stews. 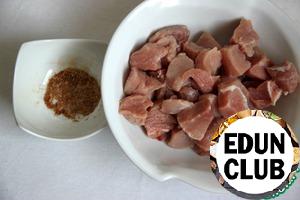 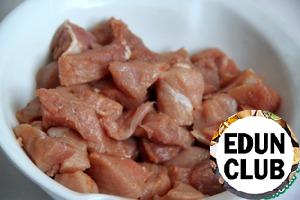 Grate the meat with a spice rack and set aside to marinate, while we do other procedures... Finely chop the onion and garlic. Peel and cut into cubes (1x1 cm) pumpkin and potatoes. 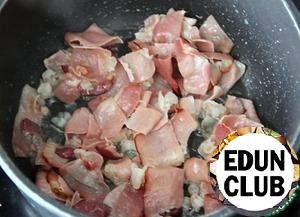 Cut into strips or cubes, or bacon/ham.
Preheat a skillet the butter and fry in it the bacon/ ham 2-3 min. Fried bacon postpone separately to the plate, and the resulting fat continue to cook the meat. Put seared meat to the bacon.
On the formed meat juice and fat fry on medium heat onion and garlic until transparent. Tomatoes in their own juice and RUB through a sieve (cake can use when preparing vegetable broth).
Add tomato pulp to the skillet to the onions, return to him the roasted meat and bacon, add a little water (0.5 stack.). Reduce heat and simmer for 15 min. 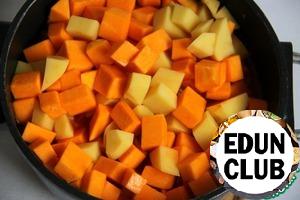 Add to the skillet potatoes with pumpkin and add a little water to almost cover the stew. Salt. Cook without a lid until the potatoes are done. Several times to mix. 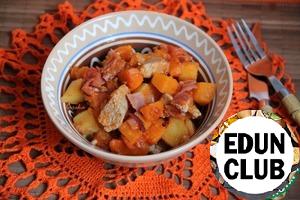 Turns out stew meat, vegetable, a little sweet but with a pleasant aftertaste of sharp spices. I added spice considering the fact that the dish will eat the child. For the more hardy of receptors, it is possible to increase the number of spices for meat. Pork baked with cabbage and apples
175 - 120м 4
Juicy roasted pork neck for my favorite in honor of the holiday! Pork sous vide
299 - 240м 12
Here's parosetine happened. Personally, for me, is so much tastier and sweeter is the meat with a piece of bread to saucerrottei than, for example modern cooked sausage to use, even the most - presamy. Prepares, among other things with absolutely no hassle. Don't believe? Then take a look. Pork chop with hazelnut and mushroom sauce
152 - 40м 4
A combination of pork and hazelnut for me was very interesting and spicy. The highlight of "banal chop" in this recipe gives a coating of chopped hazelnuts. And perfectly complements the taste of that creamy mushroom sauce. To cook is easy, and the result is sure to please! Pork ribs in the style of fusion
174 - 60м 4
The combination of pork ribs and spicy tomato marinade just incredibly delicious. Meat is very rich due to the fact that for a long time languishing in the juice, and then gets crispy by cooking under the grill. Help yourselves, friends! Chicken with pork and mushrooms
214 - 60м 4
We have managed not only to adapt to the market stalls with Korean salads, appetizers, seafood, but also love them. What a mistress, passing by this motley abundance, do not want to cook at home something like that and regale your family or guests? And especially when the sun escapes over the horizon at 10 a.m., and 14 hours of the day late at night. That's when Korean cuisine drenched in sunshine, give a sense of spring warmth. Look at the bright colors of the products, you will inhale the wonderful aroma, spicy swallow a piece of meat with a fiery cabbage and feel that life is good. I suggest you to taste the dish, incredibly tasty and to describe its range of flavor, not enough words, but... there's a little secret... I'll tell you but don't tell anyone, "It is necessary to cook and... EAT!" Below is the list of secret ingredients. Enjoy!!!
More recipes