Kibbeh Biel saniah (Кibbeh bil sanieh) is a very ancient food. It is mentioned in Assyrian and Sumerian writings, at the court of the Assyrian rulers was considered one of the main delicacies. It is a kind of meat pie without the pastry. There are many ways of cooking kibbeh in accordance with national traditions and family recipes. The main thing in this dish, it always contains a mixture of ground lamb, cracked wheat – bulghur and onions. Very, very tasty!!! My thanks to O. Baklanov. Again, only thanks to the contest acquired the bulgur and just fell in love. Wonderful rump. If you have the opportunity - buy, will not regret. Soak bulgur in boiling water, leave until absorbed.
In middle Eastern countries lamb, grinding it manually, I advise you to try the authentic recipe. I, for lack of a lamb, had to replace the meat in mixed meat.
So, in a bowl mix finely chopped onion, bulgur and minced meat. Vystelim shape with a diameter of 26-28 cm parchment.
Stamped with wet hands, trying to keep the thickness of the cold layer were the same. With a knife divide into segments: 4-8 parts. Bake in a preheated 180 degrees oven about 30 minutes, until slightly crispy crust. 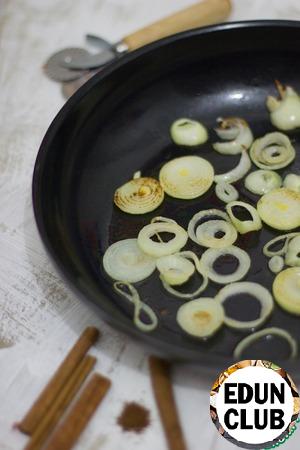 While baked basis, remaining onions cut the same thickness of the slices and fry in a small amount of oil until Golden brown on both sides. Lamb with chickpeas with tavenna sauce
59 3 120м 4
Lamb seasoned with aromatic spices and melts in your mouth! The "crown" of mutton loin
95 - 70м 8
Very delicious tender meat with vegetable garnish. Of course, the dish is time consuming, but for the holiday table, sometimes you just have to try. Lamb ribs in pomegranate-soy sauce with oranges
88 - - 2
The meat takes on an unusual taste with a pleasant acidity. This not only gives a sour orange, but pomegranate sauce (also called Narsharab). Well, very tasty!