The recipe for this bread I took from the book "Serves them bread machine". It's kind of interesting (in form) and delicious (for fans of rye baking)bread. In the bread maker of products for wheat knead wheat dough.
Because the yeast used fresh, they are pre-diluted in water. The products are planned based on the instructions of CPS and set the mode to "dough". 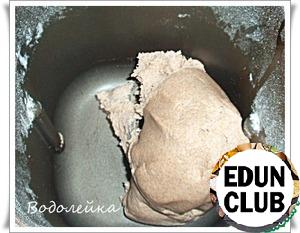 In the same way, and knead rye dough.
But... the only flour I do not recommend immediately pour the ENTIRE.
I first fell asleep more than a half of flour, and then gradually added until the correct bun. And rye flour, unlike wheat, I have still remained. The wheat and rye dough and leave to rise somewhere around hours. 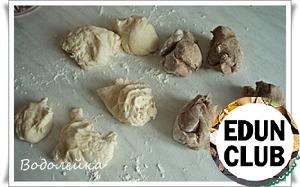 After the punch down and divide into several parts. The number of pieces. From pieces to form something like a sausage and put in the form.
There are two options:
1. If a bucket from KHP rectangular (i.e. two zapesochnyi blades), you can bake directly in HP. To do this, lay out our "sausages"right into the bucket of CPS, alternating between rye and wheat dough. Put the bucket in place (ie CP), give more time to come and after the turn on mode "baking".
2. If no rectangular bucket (like me, it is high, ie one blade) bake the bread in the oven.
The procedure is the same as above. Spread "sausage" in the form of alternating rye and wheat dough. Allow dough to rise and bake in the oven at t 180 gr. for about an hour.
In the photo I have a form 12x 25... but for this amount of dough, which turned out to be necessary to take a rectangular shape a little bigger. Width, as it does not really play a role, but long-Yes. After baking, the bread is removed from the mold and allow to cool on a wire rack. It is better to cut a little obliquely.
Very tasty served fresh with olive oil, which is mixed with garlic.
Or in the form of a toast (toast) with butter. Bread with potatoes
175 3 - -
Fragrant, delicious bread that is not stale for a long time. Barley bread
120 - 240м -
So I bake bread, combining each time a new different flours and additives. This is one of my experiments. Help yourself. Homemade bread from two kinds of flour
88 - 120м 6
I want to share a recipe for homemade bread, which recently started to bake. It turned out, making bread is not so difficult, but homemade bread is much tastier and more fragrant than store bought. Rye bread Borodinskiy
97 - - -
Very tasty, fragrant bread. And if the slices to put it in the toaster, make it almost cookies perustuvaa crust, which is so nice to spread the honey. One time I couldn't buy a malt and baked on dry kvass, bread is in no way inferior. I mainly bake this bread in a bread maker, but who doesn't, today I will show you the recipe for the oven. French baguette "Tourbillon"
123 - 30м 8
Looked on the website recipes French baguette, there are similar recipes, but my proportions are a little different, so I decided to upload the recipe. And there, too, as the administration will decide... the Bread turns out incredibly tasty and beautiful! Loaves "Ears"
98 - 240м 12
Very tasty loaves from my favorite dough for challah. This recipe I borrowed from television Kitchen TV from the series "honest bread," I just increased the aspect ratio. Creamy rye bread
133 - - -
The porous, tasty bread with sour cream and cumin! On the Internet a lot of cream and rye variants, I took the layout from Mila55, thank you very much The recipe is suitable for HP.
More recipes