There are many types of this dish. Yet it is called "moussaka". I have tried many, but I prefer "MUSHA Armenian." The dish is simple but the result is tasty and satisfying.

To cook is ground meat (I prefer 70% beef 30% lamb.)
A little minced fried in olive oil, when roasting abundantly percu with a mixture of peppers, respectively, and salted. Spices have so much to then beef gave it to vegetables, because further cooking add only a little pepper.
Then the eggplant.
Skinned, cut into thick circles. Slightly sprinkle with salt and leave for a while so that the eggplant gave the bitterness. A little roasted eggplant. Then everything is simple to banality.
Take a deep bowl, spread on the bottom layer of eggplant, Next a layer of meat. 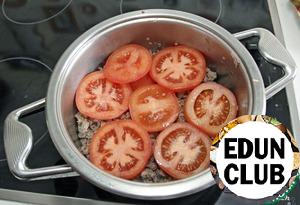 Bell pepper,
Sliced onions,
Coarsely chopped garlic.
You can put hot pepper (important not to overdo it with the sharpness). 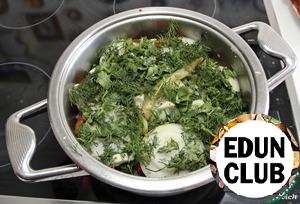 In the final sleep of cut greens. Again a layer of eggplant

If a large number of consumers, again the meat and in order.
I stopped on one tab, because the company was small.
The dishes put on the stove and put on medium heat until tender.
When serving sprinkle it with chopped greens.
Bon appetit. Beef goulash
437 - 60м 5
I think you could make goulash not only beef, but other meat that you have available. In General, the dish is easy and delicious. Under the video, a detailed description of the recipe. Manti"carrots"
349 - 60м 4
Similar carrots on the website are offered your option found in the network. The author of this recipe is not known. Beef with sesame seeds
285 5 - -
For the contest "new year tastes of the planet." A classic Chinese dish, very popular in the New Year. Besides, I think that suits for the new year table 2010, there should be a lot of meat. "In Nian Kuai Le" gentlemen! (Happy New Year, gentlemen!) 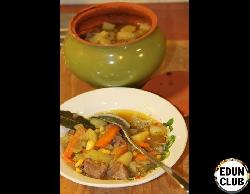 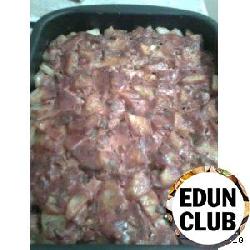 Hot Forester
388 - - -
Despite this long sequence, the dinner turns out to CHEER. Beef in soy sauce for 25 minutes
320 3 30м 3
This dish is my lifesaver for several years. My family love beef, and it is 2 hours, and after work this time not physically. This recipe I suggested to my friend cook. Meat is cooked quickly, taste is not melting in the mouth, and not hard. Retains the maximum nutrients. In the finished dish taste of soy sauce is practically not felt. After appearing in the family this recipe I stopped cooking the Stroganoff, because it takes a lot of time. So well marinated and the beef medallions. My husband calls it "restaurant beef flavor". If you're interested - go. Bobota
0.6k 4 - -
I just found a very interesting name. Bobota. What would it mean?.. Decided to cook. Honestly, the dish is not too impressed me... but I'm too spoiled!.. Maybe for someone it will be of interest! The dish, in my opinion, too simple! But my husband liked it!
More recipes