I come to you with pasta. Pasta - pasta was invented in Italy in the late 17th century, at first pasta was the food of the poor. Centuries passed, during which the tradition of cooking pasta improved, as improved suits, styles in art and architecture from the Italians. In our day pasta the main dish on the Italian table. I must admit that the pasta triumphant March around the world, rarely leaving anyone indifferent, surprising variety of shapes, colors, and sauces, served to her.

Ingredients for Papardelle with beef

Step by step instruction of cooking Papardelle with beef 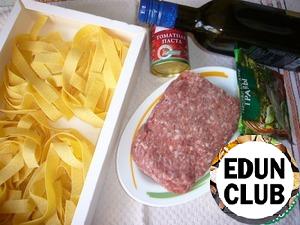 The ingredients in the photo. In the name of the food specified meat, and it is, but it is necessary to prepare the stuffing, I used ready. On a heated pan with olive oil, put minced meat and fry, stirring from time to time. When the beef is slightly browned, add the tomato paste. Mix well and cook under a lid, stirring occasionally, until fully cooked, about 10-15 minutes. Grated on a coarse grater cheese (missed this step, as not important) to divide approximately in half and add one portion of the stuffing. Remove the pan from the fire to the edge of the plate and mix well so the cheese began to melt. In a large pot (3 liters) pour enough water, add salt, bring to a boil and lower papardelli (pasta should be completely covered with boiling water). Cook on a medium heat until tender, about 10 minutes (important not to digest). Put pappardelle in the pan to the meat and mix. Tomato sauce with pasta and shrimp
105 - 30м 2
The dish is made, but if you cook in parallel, everything will be ready in half an hour. Everyone gets to dinner high-quality pasta with creamy shrimp and juiciness dilutes all this tomato sauce, which can be reduced to puree with a blender. Completes the picture of the juicy corn. Balanced and delicious! Unusual spaghetti
74 - - -
We will not add the usual ketchup... will make an interesting sauce with zucchini! Surprised? Go! Treat! Penne pasta "Mama MIA"
274 - 60м 6
A few words about this dinner: the Officials, the Bomb, Mama MIA... Girls, finally I found your recipe for macaroons... We tried different meals and home and away, and in restaurants, but what we ate yesterday for dinner, we have never met: combination of taste, beauty and enthusiasm, all very much liked, even those who do not eat the pasta; once tasted, asked for more, and the sounds of this pleasure was, "mmmmmmmmmm m", "oooooooooo oooooooo", and how much time my husband kissed my hands for this dinner - it's all the best thanks. I suggest to you the recipe for our enjoyment. Climbing from the Marina
95 - 80м 8
Delicious and most importantly - quick dish that can be varied, both for daily food and VEGETABLE option for the post!!!!=))) Spaghetti with seafood and vegetables
57 - 30м 4
This dish is my debut on the "Cook", so please do not judge strictly. The site has many recipes for spaghetti with seafood, but I hope You like mine! (Photo quality is not very good, because it was done on a mobile phone. )