Many researchers of Eastern cultures claim that it is a wonderful light and satisfying dish came to us from South Korea. This is evidenced not only thin noodles, which is its Foundation, but also rich specific spicy taste which gives the dish a special freshness and piquancy. Its name comes from the Korean word "Mexicali" — the mixture of different vegetables included in the soup. For the first time this dish, I had the opportunity to try not long ago, visiting Korean families, our friends, however, they lived all his life in Russia in Krasnodar, but I love native cuisine and cook Cooksey soul. I was pleasantly surprised and now I cook it is along this family recipe itself. I suggest to you to get acquainted with another recipe of a delicious cold soup that I'm sure will take its place in your cookbook and would be approved by my family and friends. This soup is simple, although it may seem like too long to prepare, believe me, it is not. Another great feature of the soup that all zagotovochki can be done in advance at home, this taste will only become richer, noodles buy Cooksey-mechenko, it is not necessary to cook - just soak in water, and the nature to enjoy a wonderful combination of fresh vegetables and tender meat with a refreshing broth. + bonus starter salad from kuksi with a sweet chili - lime from Blue Dragon on a potato flapjack 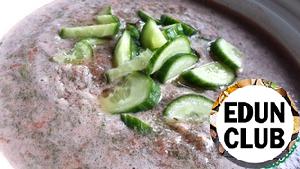 First prepare the broth – "Cooksey-Muri".
Tomatoes 3 PCs wipe in a blender or grate on a coarse grater,
single cucumber slice as you like.
Half of the dill, cilantro finely chopped, pour enough water, add salt (preferably "enemy"), sugar, soy (if using) and stir, add a little vinegar and soy sauce to taste. 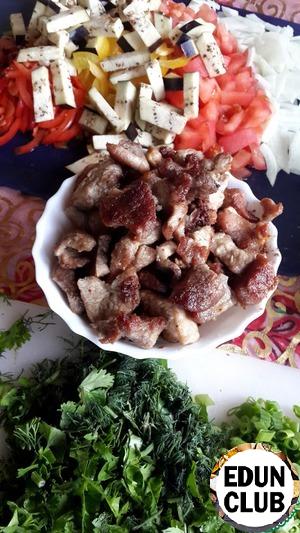 Now for the meat. It should be cut into thin strips across the grain. If we take pork or chicken breast, then fry in a large enough quantity of soy (sunflower, olive) oil over high heat until Golden brown literally 5 minutes, add onion and fry until it will turn brown 2 minutes, sprinkle with salt.
Not necessary to do this at the beginning of cooking, in the end, only to cool meat. If you take lean beef, then fry as well, but after pour 0.5 cups of boiling water, just add salt, cover and simmer until tender about an hour. The water should all evaporate and the meat will become tender. My meat grilled and cut MCH )) of course a little thick but the taste is not affected. Cucumbers cut along the length and cut into thin plates.
Slice the radishes as well.
To prisolit, stir, leave for 15 minutes or more. For the remaining tomatoes to make a cruciform incision, pour boiling water for 1 minute, remove the skins. Cut into small dice.
Onion cut into quarters and thinly slice,
pepper release from the stalk, cleaned of seeds, cut into 4 pieces lengthwise and finely chopped. The remaining finely chop the greens.
With cabbage cucumber and drain the juice, you can add it to our "Cooksey-Muri". The cabbage will add a half roast, half of the herbs, crush the garlic cloves, season it with coriander, salt and a little sugar.
To the cucumbers add all of the same taste, you can season with pepper. 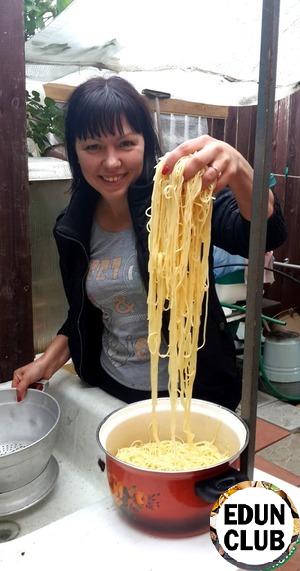 Rice noodles or spaghetti according to cooking instructions on the pack, wash well with cold water For our meals necessary for egg pancakes.
Whisk 3-4 eggs, add a tablespoon of vegetable oil, salt.
On a small amount of oil over medium heat cook the crepes. Allow to cool, turn rolls and cut into strips. Stew with radish "In Staraya Russa"
0.6k - 20м 6
This is a recipe from my childhood! Such a stew we were cooking with my grandmother in the village. The recipe is very simple, but so delicious! Tarator
0.7k 4 15м 4
Tarator - cold summer soup with cucumber and milk. Delicious. Favorite soup in Bulgaria and Northern Macedonia. Usually served before or in parallel with the second dish. Try tarator at once, it is impossible to stop. Bulgarian soup "Tarator Almost"
0.6k 5 10м 1
On the website there recipes Chattering, but my more all close to this option. But my not quite true Tarator, so "Almost Tarator". Ate! Okroshka in Uzbek (calop)
1k - - 2
Of course, the real Uzbek cold soup calop preparing a mixture katika and cold water. Katyk is sour milk fermented with Bulgarian Bacillus culture. Offer to make an adapted version – okroshka in Uzbek. I looked through all the options of acrocheck on the website, but this has not happened. Beet soup with coconut milk
0.7k - - -
Today I was visiting my daughter, ate a bowl of soup... loved it. And recently calls and says: "Mom, what if tomorrow I came to you... because it is Necessary to help you to eat your gorgeous soup... " This soup is something incredible, amazing... spicy, flavorful... If you like beets, you'll just conquered))) by the Way, he did not have specific beet flavor and aroma. Will have to Tinker, but honestly, the result is worth it))) Soup pepper
0.7k - 40м 2
What could be better than cold, light and healthy soup on a hot July day. It will be a real decoration of your table as it is very colorful and unusual. And what he's got amazing taste!!! The middle of the courtyard is hot, and Is fried in the morning. Climb into the yard, And deep Heat is. Heat a long time it is time to go, But in spite of all the Heat is. Today, tomorrow and yesterday, Everywhere Heat, heat, Heat... Well really she's not too lazy to Stand in the sun all day? E. Bitsoev For the contest "summer Inspiration". Jelly kvass
0.9k - - 6
Crisp, cold and hearty soup perfect with a sour taste and a burning mustard. Instead of mustard, you can take the hell, is also tasty.
More recipes