Fun recipe for a children's picnic or just to pamper our children. 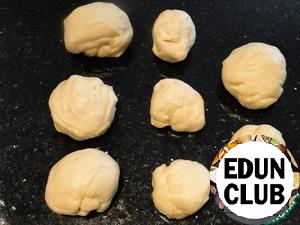 Divide the dough in half. One part put into the refrigerator, and the second to divide into 4 parts, each of which divide into two unequal parts: 2/3 and 1/3. In total we get 8 pieces. Large pieces of rolled out rectangles and put on the middle of the sausage, close to the bottom edge. Fold side edges of dough over sausage and put seam side down. From the edges of the dough that is closer to us, twist the ponytail. And because of that, that then formed the head and neck. Now take small portion of dough (1/3) and divide it more equally. From one half of roll the flagellum, but that rolled out was the middle, and the edges are left thick-these will be the ears. Slightly press them with your fingers. 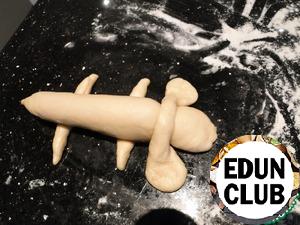 And in another twist the two thin flagellum-it will be legs. Puts them under a future dog, and the ears put on "neck" that we have formed. Bake for about 15 minutes at 175 degrees. 5 minutes until ready to grease with a butter. While "dog" rest and cooled, will do the decoration: from thin slices of cheese with a pot lid with a small diameter cut out two circles (for each hot dog). It will be the eyes. To consolidate them using the peppercorns or cloves. Pepper or olive pieces to make the nose. Repeat same with second half of dough or to bake rolls, which I did. This dough is perfect for them.
Bon appetit! Swedish breads
478 - - -
"Swedish crispbread" is a simple, tasty and very crisp! Come and visit us, Cooks, it's get cracking Swedish bread! Belyashi with meat on kefir test
0.6k - 120м 15
Classic round with a small but - the dough is mixed in the yogurt. Do not judge strictly, my first time on the website (but not in the kitchen). In this version the taste tat brought me back to my childhood. Thanks for the recipe Irina Khlebnikova. Christmas coconut bagels
333 - 40м 10
Traditionally, such biscuits in the form of a Crescent bake for Christmas. Add nut flour, usually almond. The author-Maria from Germany allow even baking of plain flour. I decided to add coconut, he gently stands out and adds crispness liver. Caramel-nut strips
0.5k 3 - -
Sand strips, covered with caramel on top of the condensed milk with nuts. Sweet, very good with black coffee without sugar. To cook quickly and easily. Biscuits "Sugar rings"
0.7k - 60м 4
These cookies go to "Bang" for children. And adults for tea quite often ask them to bake.
More recipes