Soup of zucchini and not only Offer a recipe of soup - very tasty, fragrant and pleasant in all respects. Tried to trace the history of soup, I learned that it was sung in the poetry of 12-13 centuries, and perhaps he really appeared in the expanses of the great Roman Empire before its fall. Perhaps there is some gene that is inherent in many of us, so many are so indifferent to these delicious soups.

Ingredients for Soup of zucchini and not only The picture shows a set of products from which to prepare the soup. Sorry, but the flour did not hit the lens.
Vegetable broth can be made with any vegetable. 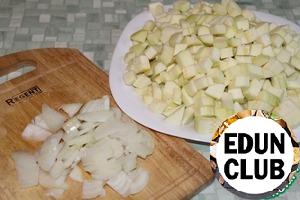 Sprinted the zucchini in small amount of boiling milk with butter. Milk pour just enough to barely cover the zucchini. Therefore, it is necessary to admit that the amount of milk in the ingredients are approximate. 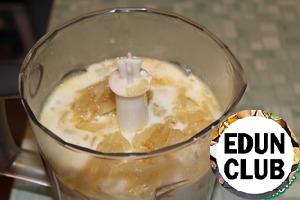 Ready zucchini together with the liquid and caramelized onions was milled (ground) in the bowl of a blender until smooth. 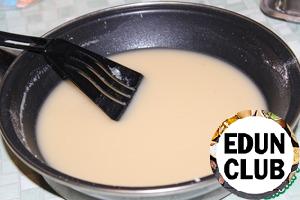 Breed flour, vegetable broth, pouring it in portions, stirring thoroughly-rubbing, to avoid lumps. The decoction of leaves is approximately 200 ml. 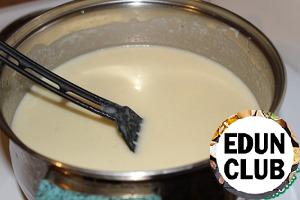 Mix in a pot puree of zucchini with white sauce and dilute with hot vegetable broth to desired consistency, bring to a boil. The amount of vegetable broth in the ingredients are approximate, it is difficult to assume how thick the soup will be after mixing the zucchini with the sauce, finally, everyone has their own idea about the density of the soup. It is necessary to add to the soup the liaison, before ever wondered what it is? Specifically I looked in the Internet, it turns out that in French it is a bunch, the connection to create a shell between products (in this case, soup) and the environment. Cool!
for preparation of a liaison blab yolk with a fork and pour 100 ml of hot but not boiling milk and heat until thick. Cool the soup to about 70-60 degrees, but the liaison and warmed up the soup. 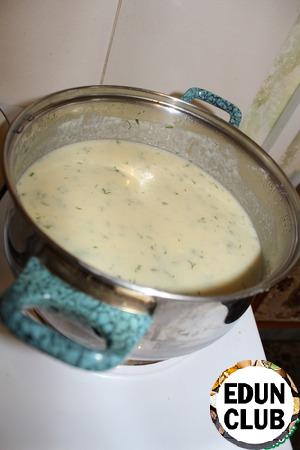 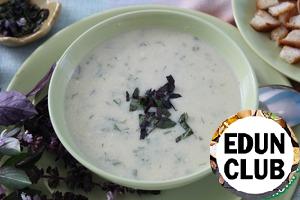 Serve soup with chopped Basil leaves and croutons fried in garlic butter.
Garlic oil is sunflower or olive oil, in which is pressed a couple of cloves of garlic. Seasoned with garlic for about 30 minutes, then filtered. Milk soup with rice and zucchini
61 - 45м 4
Very tender and easy to prepare soup. As an option easy and quick lunch or dinner. Vegetable soup with rice "Easy"
125 - 15м 4
Easy vegetable soup for hot days when you do not want heavy meals. And the fragrant Jasmine rice from TM "Mistral" will give it a pleasant aroma. Cheese soup with mushrooms in bread
66 - 30м 4
My family loves all kinds of cream soups, favorites has always been the cheese and mushroom. This time I decided to connect them and get an incredible result! Very tasty, fragrant, textural. The supply of bread not only looks effekto, but very interesting in eating. First, getting a spoonful of soup, a bit is passed along the walls of edible "plates", thus collecting myakish-soaked bread. And secondly, you can snap off a crisp, rosy wall of bread. A bit of sugar to the soup it's really good. The soy sauce enriches the flavor of the soup and makes it even more interesting. Cream-soup with champignons
82 4 20м 1
Eating this soup in the chocolate, I love it. Decided to try to cook myself, turned out quite tasty. Potato soup with salmon
77 - 60м 2
Potato soup is prepared simply and quickly. It is possible to add croutons, mushrooms, shrimp, chicken. Offer to cook potato soup with marinated salmon on skewers. And to cook this soup with Zepter pots - a pleasure! Using a pot with a steamer, we not only save time but also get the opportunity to cook several dishes simultaneously. You can enrich the diet of healthy and tasty dishes. When cooking without water, vegetables or fruit we prevent the loss of natural nutrients. With Zepter pots You will discover new ways of cooking, which was previously thought to be impossible. Soup with dried apricots in Armenian
94 - 40м -
Interesting, very unusual and quite tasty soup, based on traditional Armenian recipes. The apricots add to the soup a mild sweetness. And lemon juice is sour. Despite the minimal amount of ingredients, the soup is quite satisfying.
More recipes