This is not an original recipe of the famous Tatar pie. And adapted to the tastes of our family meat pie. And since this cake is popular not only among my family members, but the regular recipe is overwritten guests, neighbors - who still managed to eat of this pie. I decided to your own risk - to put your option on the cook. Recipes cubeta here a lot and they like each other, yet a little different, there are differences. So I hope that my recipe will be useful to someone. Meat pork and beef cut into cubes, my love the smaller, the better, but still not to the point of grind in a meat grinder meat. 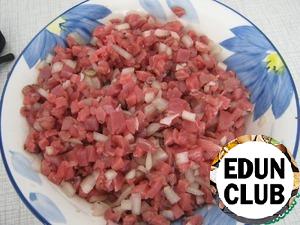 Onion (1 piece) cut dice, mix with meat, season with salt and pepper - salt and pepper to taste, I add more cumin. Cover with a lid and leave to infuse, to zamarinuetsya in the refrigerator on the bottom shelf at least 2 hours. For the test. Frozen margarine grate on a coarse grater and mix with 2 cups of flour - grind your fingers into crumbs. Add sour cream, milk, and vinegar - mix well, portions add the flour knead the dough. Roll the dough into a ball, folded in a bag and leave in the fridge for 30 minutes. 30 minutes to get the dough to roll out into the reservoir, grease with vegetable oil over the entire surface, fold the envelope again and put back in the package and in the refrigerator for 20 minutes, this procedure is repeated preferably 2-3 times ( just until the meat is marinating). Potatoes and 2 onions cut into dice, season with salt and pepper, mix with camarinopoulos meat. The finished dough divided into 2 parts ( one bigger, the other smaller). A large part of dough roll out and place on a greased baking sheet, form, form ledges (I used a cast iron skillet). Put the stuffing on top, flatten it slightly with your fingers. The rest of the dough roll out the dough and cover the filling, zasiyaet region. In the middle, make a small hole. We decorate our cake. Lubricates the yolk. The original hole shuts up a piece of dough or onion inside the pie is added to the broth. I have nothing in this recipe do not. Into the hole pour marinade remaining after the juice and send in a preheated 200 degree oven Yes, cover the pie Golden brown. Pie "Valentine"
125 - 120м 8
Not far off February 14 the holiday of all lovers. Let's cook together fragrant, strawberry shortcake Valentine. All enjoy your tea! Plum cake
91 3 45м -
Again my revision in the fridge gave me a beautiful and delicious plum cake!! Pie with salmon and rice
104 4 55м -
Delicious and rich cake of delicate dough. The dough is exceptional, for most beginners. This yeast dough is obtained at all. Pie "Golden leaves"
83 - 120м 8
The cake was very aromatic, airy and delicious. Decorated the top with chocolate and coconut. For the cream (filling) I have cottage cheese with condensed milk and a little color and flavor pureed raspberry jam. Poppy seed cake "Improvisation Marina"
87 - 100м 4
Poppy seed cake "Improvisation Marina" love cakes with poppy seeds and I decided to bake. Rummaged in its records and the Internet. Found variations of cakes a lot, but always had some kind of a nightmarish amount of butter and sugar, what I recently try to avoid. I decided to improvise... And this is what came out of it... Sour cream pie with meringue hemispheres
81 - 60м 8
Few people know that such a familiar product like sour cream appeared in Russia. In Russia in ancient times milk was left to sour, in consequence of removing (destroying) he "tops", and why it came to be called "sour". In the world of the sour cream became widespread only at the end of the Second world war. Sour cream is considered a traditional Russian dish. Are and You a simple cake with sour cream, decorated with crisp meringue with a favorite cream to Your taste Banana-strawberry cake-pudding "a Taste of summer"
106 - 60м -
Stale in my refrigerator a couple Baranchikov and some strawberries... Just fruit salad is no longer wanted, and came up with the idea.. That's what happened... Triangles of chopped dough
115 - 50м 5
Rare recipes based on this test, so we decided to share their favorite pies in the family! Cakes of light, thin and crispy dough! For those who don't want to eat a lot of dough, and only a thin crust around the toppings! This recipe I use already 10 years old, thanks mom!
More recipes