Ribs with vegetables in a mini-tagine An exotic dish in all respects: the meat turned out tender, despite that game. Found in the taste and sharpness in the taste. Unusual, but tasty.

Ingredients for Ribs with vegetables in a mini-tagine 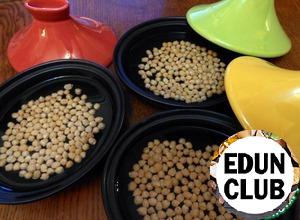 Overnight soak right in tainykh chickpeas with the addition of soda. And marinate the ribs in lemon sauce. The meat can be any, as the marinade can be any.
The next day:
Peel the onion, cut into large portions.
Also peel the garlic. If slices are large, cut them in half.
Preheat a frying pan vegetable oil, fry the onions and garlic. Add the spice blend to sauteed onion and garlic. 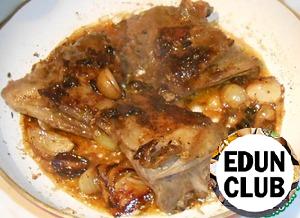 Just a minute later to put the meat in a frying pan and lightly fry on both sides. Soaked chickpeas, rinse, drain the water. Put in every tainic on top of meat, add the roast, pour the spicy oil (with barbariska and other pazarci will be filtered out). 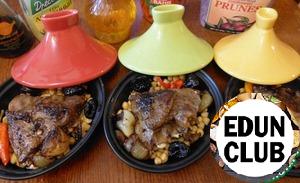 Add to each taronik one pepper-Chile, three berries of prunes. To put the tagines on the stove on the smallest heat.
After an hour of stewing tagines can be removed from the fire (10 minutes before end of cooking the oven can be turned off and leave the tagine to reach on / off plate). Hot "Madame Bovary"
192 - 120м 3
The perfect combination of chunks of tender chicken, flavorful potatoes, tomatoes and mushrooms in a cream sauce... Treat yourself and your loved ones. Vegetable stew with beef in pot
69 - 90м 5
Autumn tango. As I am glad that not Krakowiak winter, not spring and not summer dance the minuet. I love to cook this time of year. In my version, the vegetables are eaten, even those who in most dishes doesn't like them. Roast chicken in pots
78 - - 3
A delicious and hearty dish. Goes well in the winter cold, as the dish in the pot stays hot for a long time. The meat in the pot "at Home"
54 - 60м 4
In autumn you want warmth and comfort. The rain grey rain and leaves swirling in the wind, like a dance, "Autumn tango". In this weather just come in handy this recipe. The meat turns out very tender, the kitchen filled with a tantalizing aroma, and the whole family gathers to eat the meat in the pot in a cozy atmosphere. 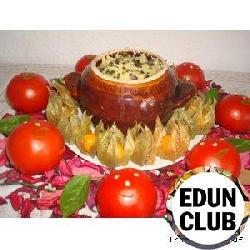 "Great Improvisation"
74 - 90м 4
Come autumn, our hradecka is ripe for all kinds of vegetables, which we all summer lovingly cared for. Now it's time for them to collect and prepare all sorts of Goodies. My "Delicious Improvisation" for the contest "Autumn tango"! Beef with rice in pot
92 - 60м 4
Food cooked in a pot, always are of extraordinary flavor, and the cooking process - the lack of "dirty dishes". Besides, if you cook in small pots, - we can also supply portion control. This dish is very tasty it turns out that the rice soaked in meat juices and extraordinary flavor of the spices! Magic pot
62 4.5 30м 3
I love to cook in the pot is clean, tasty, fast and versatile! I rarely cook hot ordinary - something not a lot of respect stewed potatoes with tomato sauce... So often prepared differently. And I like that you can simultaneously cook different dishes - well, today I have 3 pots and they are slightly different in composition. And the only - elementary!
More recipes