Recently I posted a recipe crunch with cheese, now I want to introduce you to a sweet crunch which in Estonia is called Kringel. Delicate caramel - creamy taste and plenty of toppings... the Perfect finale for a celebratory lunch or dinner.

Ingredients for Sweet crunch with raisins

Step by step instruction of cooking Sweet crunch with raisins Our products. To prepare the dough, mix warm milk and vegetable oil add the pounded with salt and sugar yeast, the flour and put the dough in the proofing in a warm place. Flour may take a little more or a little less, the dough should be soft and tender with a slightly damp ( do not hammer it with flour). Raisins and apricots with warm water and allow the water to drain so they dry. 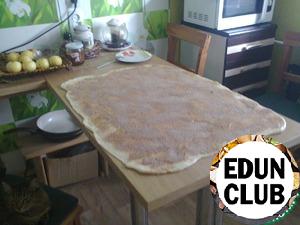 Our approached to roll out the dough thinly, brush with softened butter, and sprinkle quite liberally with a mixture of sugar, cinnamon and vanilla sugar. The dough is neutral in taste, I use one batter crunchy when I cook, one recipe for both sweet and salty. I have in the Bank is always in stock sugar mixed with cinnamon for the filling. 1 kg. of sugar I take 2 packages of 15 gr. cinnamon and 2 packets of vanilla sugar 20 gr. The amount of cinnamon and sugar for the filling.. give an approximate Layer of rolled dough should be generously dusted with cinnamon sugar or the pastries will be of poor taste. Sprinkle as mine, if you show a lot or a little sugar the next time you can adjust the amount of sugar. Usually traditionally used for stuffing raisins or a mixture of several varieties of raisins. You can put the poppy seeds or nuts or chopped ripe bananas. I like it traditional with raisins. After cutting bends the edge of the slices at the bottom turns a neat braid. Dough to grease is not necessary, if you want the crust turned out soft. Crispy crust, brush the loaf of dough before cutting oil, and then cut, just sprinkle with cinnamon sugar cut loaf before baking is also not necessary. To put our crunch bake in a pre heated oven at temperature of 180 gr. The first 10 minutes of baking, do not open the oven door the dough evenly risen. As soon as the crunch was light brown, check it for readiness with a splinter if there is no raw dough, you could remove crunch and cover with a napkin. Will not overdo it in the oven otherwise it will dry out and the sugar starts to burn. 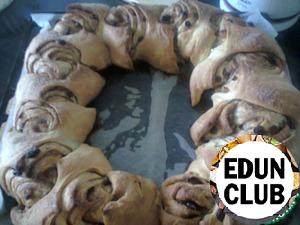 Improvisation khachapuri
118 3.5 - -
Khachapuri I really like.. but the family is not very ... because of its slightly salty taste... a bit changed.. the filling came out juicy and not as salty.. Canela
124 - - -
"Canele" - a French delicacy. This is the original cookie with a crispy caramel crust, the inside will remain tender and slightly moist, with a hint of vanilla and rum, a true masterpiece of French cooking! Give your loved ones for Breakfast a little trip to Paris! Moreover, all training test will be held on the eve and in the morning it will only bake. The dough is "fellow Traveler"
104 - - -
Long time I use this recipe and the dough was just awesome... is Suitable for both fried and baked pies. Moldavian layer pie with pumpkin
93 - 25м 8
Pumpkin is very tasty and useful vegetable, which contains a large amount of carotene and vitamins. In the pulp of the pumpkin contains a lot of valuable for the child's body of vitamin D. But unfortunately right now to force a child to eat pumpkin porridge, or just a piece of baked - you need to put a lot of effort! I found the best method: as always - tasty-quick - is not expensive! Try it and you will not regret it! Mischievous bunnies stuffed
108 4 - 5
On the festive table they always place. For these bunnies is a fairly popular dough (in the cheese), but the toppings and decoration, I think many may be interested. These rabbits we found in some magazine and I use this recipe for years 6 -7. Wafer rolls "tea"
88 - - 11
Tubes were prepared Gostovskogo recipe, turned out quite well. Lovers of sweet, I think, to taste, and so... Cake on kefir
85 - 30м -
Was cooking dinner last night, looked in the bread bin and gasp - no bread! What to do? So I decided to bake a cake in haste. Was fast, but delicious like this bread-lovasik with Basil, sprinkled with cumin. Write everything down, thinking that if you like, you'll post the recipe. Liked the post! Cochinilla wonderful recipe, a sort of magic wand when the house suddenly ran out of bread. Pie "Berry"
86 - 60м 8
This is one of the most delicious pies that my mom made me. Her Golden ruchenki, of course, know better, but I tried to do the right thing; I hope someone will like it.
More recipes