Chicken tacos in the broth Tried this dish at a Mexican restaurant. Liked. To taste it was the usual chicken in tempura with broth. But I decided to do, so to speak, more than the Mexican version. Learned that a Taco is a Mexican corn tortilla. A little imagination and.... if you are tired of the classic soup "chicken Noodle house", try "Chicken tacos in broth" a La Mexican.

Ingredients for Chicken tacos in the broth

Step by step instruction of cooking Chicken tacos in the broth Boil the chicken broth as you like. I boil with the addition of carrots, onions, and all sorts of roots (parsley root, celery...) In the absence of the cornmeal took an ordinary corn grits and milled in a blender. 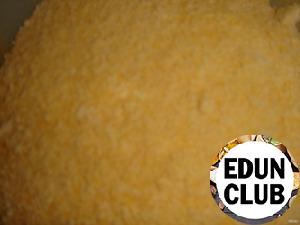 This is certainly not the flour, but not wheat. Milled as I could. 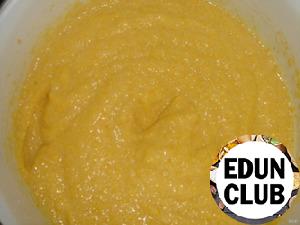 The resulting corn flour, pour the yogurt and leave to stand for a time to a mixture of "swelled" Do not waste time, cut the cooked chicken meat to separate from the skin and bones and cut into thick sticks thick as a finger and thicker. Add pepper,salt to your taste. I sprinkled paprika and red hot pepper, after all, Mexican cuisine! Add in the kefir-flour mixture the egg, salt, soda. Knead. It turns out corn batter. Dip in batter the chicken pieces. If you come across small pieces, group them in large. fry in hot vegetable oil. Lay them on a paper towel and drain off excess fat. Put pieces of the tacos in a bowl (a bowl) and pour the broth. Serve with greens. Bean soup nearly diet
459 - 50м 8
Without a doubt, any legume is sochetayutsya with smoked meat. But we at the table are often collected by children and adults. Smoked roast and other tasty harm in this case will not fit. However, it does not hurt to prepare a hearty bean soup that will be enjoyed by the whole family. Pumpkin soup-puree with peas
0.7k - 45м 4
Fast, tasty, vegetarian original taste of the soup daddy's (he is known to be a master of all trades) recipe with my additions. Help yourself to health! Soup with wild garlic
485 - - 6
This light spring soup is very easy to prepare and very tasty. We liked it very much, I hope you will like it and. Soup with dried mushrooms, fresh mushrooms and cereals
0.5k - - -
Due to the variety of mushrooms soup turns out very flavorful. A cereal company Mistral that do not require cooking, add some zest and delicate texture. Soup of processed cheese
1.4k 4 40м -
Very tasty soup, this soup a favorite from my children and husband.