Pea soup I have long time been associated with smoked and winter, until I tried to cook a new lighter version of the soup. Welcome, friends! Inside, as usual, you will find the recipe and the story about the history of peas.

Ingredients for Pea soup with salmon

Step by step instruction of cooking Pea soup with salmon Pea soup has always enjoyed great popularity not only in Russia but also worldwide. The seeds of this plant were discovered by archaeologists during excavations in Asia, which is considered the homeland of peas.
***For making this soup, I used two types of peas - green and yellow. 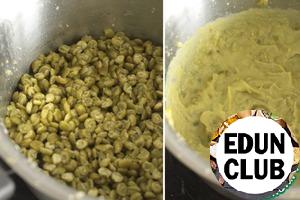 Dishes from peas were popular with the inhabitants of Ancient Rome and Greece. They are included in the diet as commoners and representatives of the upper class.
***Peas need to clean, cook from the ratio of 1:2 until soft about 30 minutes. In our case, green and yellow split peas cook in separate pots. Using a blender make a puree of peas; I love the option that are part of the pea. It is known, for example, that the Tsar Alexei Mikhailovich, father of Peter 1, particularly disliked the steamed peas with melted butter, and pies with pea filling.
***Begin to collect our soup. In a bowl pour 2/3 of the green pea soup, then pour the yellow, and yellow add green.

And pea soup is mentioned in the famous book by Remarque "Black obelisk": "We sit in the office and wait for Rosenfeld. Dinner split pea soup was so thick that the ladle is a spoon upright..."
***Decorate the soup with salmon and fresh dill on the perimeter. Soup with pasta and beef
68 3 90м -
There are many interesting recipes how to cook soup. But I recently read an interesting recipe and decided to try to cook (of course, I made my changes) - was very tasty. Husband was happy and well-fed))) Cream soup of leek with mustard
131 - 30м 6
Hearty, slightly spicy soup with a delicate taste of the leeks, thyme and mustard. Soup-puree of potatoes and celery
82 - 30м 4
Who is soup? Tasty, healthy, vitamin? Come on, people! Soup for a slim figure and good mood! Pea soup with cream
73 - 45м 5
Not so long ago found the recipe for this soup on the Internet in that version. Since then, repeated several times, and smoked meat and without meat, and as a puree or a soup. Always been a win-win. Today I suggest you try this soup with a surprisingly velvety texture and rich creamy taste.

Cream soup "Gentle"
111 5 - -
This soup is pretty quick to prepare and the ingredients are almost always in the fridge. Bon appetit! Cream soup with seafood "clam Chowder"
99 - 40м 5
One of the favorite dishes of American cuisine is the traditional cream soup clam Chowder in the style of New England (New England Clam Chowder). After trying it once, I have not been able to forget that taste. It just haunted me day and night...))) until then, until she learned how to cook this delicious soup. It is prepared traditionally with mussels (clams), but you can use any seafood to taste, even salmon. Try it and you cook it. I assure you, you and your family are going to love it! Green cream soup with poached eggs
71 5 - -
This dish almost became a source of marital discord! The fact that my husband loves green soup (a classic), and I do not like it because of the "rags" greens and eggs (in the classic version of the raw eggs directly into the soup and spread out the lumps) But I'm just crazy about the various soups. But my husband does not like them! When cooking pass saw this option, I immediately decided to cook. I thought that option just to make us all happy: beloved husband green soup, just in a slightly different pitch. Well, I - cream!!! I'm even dreaming that her husband will then fall in love with soup... two completely opposite opinions. My husband said that the way to ruin green soup no one has been able, and my verdict - it's delicious, tender, elegant, and plus to all - and great poached eggs. So if You, like me, are fans of cream soups, then by all means try that option!
More recipes