Preheat the oven to 120-140 degrees C.
Cover a baking sheet slightly greased baking paper, put on her upside down plate of medium size and draw out the edge a little plug, denoted by the border.
In a clean bowl gently separate the whites and whisk them with a mixer. Start with medium speed. When the whites have to be whipped to peak condition, that is, when we stop the mixer and pull it from the proteins on the surface of the whipped mass formed a small but sturdy peaks begin to gradually add in sugar proteins mixed with starch, still whisking. Increase the speed of the mixer and whisk until the sugar is dissolved.

Add vinegar and vanilla and beat for another second or two. Vanilla can be in a different form, vanilla sugar, vanilla extract in the alcohol or vanilla pods. From the vanilla pod and scrape open the doors from inside the mass of black small seeds. This is the vanilla that is added to the cream and meringue. 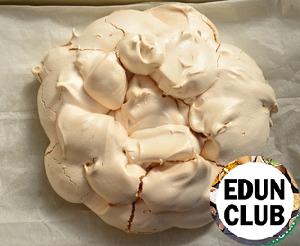 Whipped fluffy smooth mass vykladyvaem spoon onto the prepared baking sheet. At the edges trying to make waves and curls, and in the center must be hollow for the cream. Put into the oven for 1 hour or a little more. If during baking the meringue starts to get too brown, lower the temperature.
After baking leave the meringue to cool in the oven for an hour while the door is open. Put carefully on a flat plate. Meringue for Pavlova charm, she is fragile, with cracks, the surface and the inside soft souffle.

Beat chilled heavy cream with sugar and vanilla in chilled bowl using a mixer (you can just whisk) on high speed until the formation of peaks, that is, to the point that if you remove the mixer from cream, the nozzle will be peaks, and they cover the cooled meringue. Put on top of berries and fruits, you can add the cooked and cooled juice from the same fruit or vegetables. French cake "Marjolein"
1.2k 5 260м 10
This French cake, very simple in cooking (and eating simple)))) I looked a year ago, learn Sony-accountant, corrected by himself. Kapasiteli nuts, ...cream and tablets from greed)) this one is dedicated to the Knowledge Day and part of my birthday – September 1 (as evidenced by his form) and French mistress Elise and the camera. Voila - for the competition "School time"! Cake "Nutty tenderness"
1k 4 80м -
Another recipe for "disposal" of protein, no flour. French marjolaine cake, with a rich taste of nuts and air cakes, in composition resembling decoys, soft and fluffy, light, not cloying cream with coffee flavor. For the recipe, thank you so much elaizik - Elena Aizikovich. Cake "kiss"
1.1k - - -
I recommend to make this delicious cake, it will be lovely in the summer heat, it's almost ice-cream cake, but not quite... Two of cream - creamy berries and cream and chocolate are mixed into the kiss with a gentle kiss... how is it divinely delicious!!! The meringue for this recipe turns out not cloying, well, if You don't want to bake the meringue, take the purchase. Cake "Flight of the bumblebee"
0.7k - 60м 8
The basis was taken extremely tasty, but the usual cake "honey". Added to it no less delicious, but suffers from lack of test, because too ethereal, the cake "Flight". What happened when the connection was worthy of selection in the independent cake. For the recipe and detailed description thanks Karpatka. Cake-meringue with raspberries and chocolate. Dear Boy birthday!!!
0.5k - 240м 8
This delicious dessert is perfect to end a festive dinner. It's an unforgettable combination of cakes with chocolate icing with delicate whipped cream and aromatic raspberry. Chocolate-merengo-Muscovy cake
472 - 120м -
Very long stare at this cake. Held that in the present instant pudding (we don't), but after reading all the comments.. decided. It is a pity that before did not dare. )) The result is obvious, nuuuu.. very tasty cake. Recipe source from Sonia-buxgalter_sofia learn. Prepared on the occasion of the 500th recipe (finally rounded))). But since it coincided with segodnyashnim Great festive day, allow me to congratulate SAHHH chefs and a Huge thank you to everyone for the congratulations in a Positive opinion. Cake "Kyiv" new
463 - - 10
Love this cake, but unfortunately, store-bought as every year more and worse. Somehow I decided to bake at home and the result was very pleased, and it turned out that the cake is easy to prepare. Most of all I love cake "Kyiv" it is with hazelnuts. And from himself added another assemble the cake 4 cakes. I really hope that my idea will appeal to and be useful! Join us!!
More recipes