I have meat loaf again, and I hope that they will seem and you, like me, special. This time they are from Romania. While in Romania, preparing hearty and delicious, the king of spices consider garlic. Which is quite natural for the people of this country, after all, and it is the birthplace of count Dracula. I recommend to try.

Ingredients for Meatballs in sauce

Step by step instruction of cooking Meatballs in sauce The original recipe suggested to use beef, which has twice passed through a meat grinder together with onion and garlic.
I have used ready homemade stuffing. It just so happened in our family that the meat is bought, cut, milled, routed and signed, and for making what is in each package.
You the choice of which way to go.
In pictures stuffing and other necessary products. Onions - shredded in a blender, garlic skipped through the press, added to the mince. Pepper, salt, seasoning herbs, added milk. Thoroughly mixed and decided that since minced meat mixed (beef - pork), add a couple tablespoons of breadcrumbs to make stuffing certain density. Then once again mixed in the stuffing. 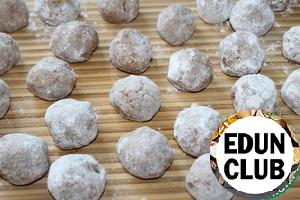 Formed from minced small balls ( about 3 cm in diameter) and roll them in flour. Then roasted chunks on all sides in hot oil. Shifted to the skillet. For the sauce carrots, leeks, celery cut into thin strips. If You have fresh parsley, then slice it as a julienne. My parsley was chopped and frozen in the fall. 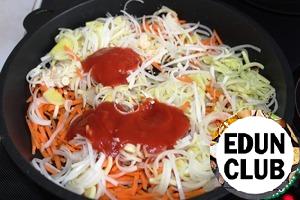 All the vegetables are put in a deep preheated with oil pan, added pureed tomatoes and lightly roasted. 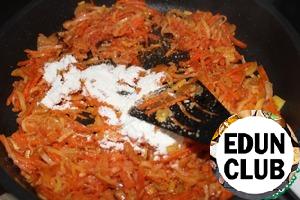 Then pour the flour, salt and pepper, well mixed. He poured the juice and prevarila on low heat, covered for 15 minutes. Poured the sauce over the meatballs and stewed on low heat for 20 minutes.
It looks like the finished dish in the skillet. 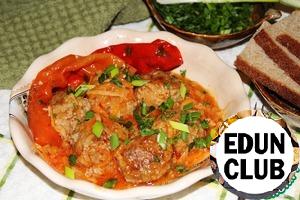 Filed prepared meatballs along with the sauce, adding in each plate with a couple of canned spicy with garlic and green pepper.
Very tasty, fragrant. Join. Cupcake "Meat fantasy"
92 - - 6
The project Galaxy GL2300 I wanted to cook a dish, simple in composition and preparation technology that it can easily be repeated in any kitchen. This dish can be served as hot or as cold snack. Turned out delicious, hearty and very flavorful. And besides, the aroma of tangerines, which are part of the meals is a very Christmas flavor. Welcome to the table! Roll with pasta
125 - 60м 3
A simple recipe with minced meat and boiled pasta. Meatloaf with ham and cheese
126 - - -
Fragrant, juicy and very tasty! My men really appreciated this dish, and the female half is not indifferent. Meatballs without rice and no eggs
194 - 40м 6
Meat meatballs in creamy tomato sauce. One small detail does not allow them to fall apart, about it further...