Milk and honey dessert made with dried apples The past summer was productive for apples. Other blanks were made, and the stocks of dried fruits. Most often they are used for preparation of compotes and fillings for pies. But if from dried fruit to cook pudding for dessert? Found for these purposes, the recipe passed with honours, is now offering it to you. Jelly can be used not only as dessert but also as a sauce for pancakes or crepes.

Ingredients for Milk and honey dessert made with dried apples The apples should be washed, pour water (4 cups), seethe until mushy state. 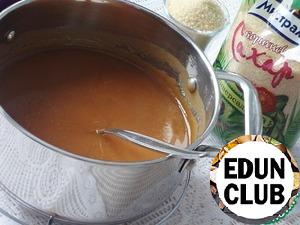 Punching blender. For a more uniform consistency to RUB through a sieve. Add brown sugar universal TM Mistral, bring to a boil. The amount of sugar according to its taste. To enter the starch dissolved in half a glass of water. Mix thoroughly. Bring to a boil with vigorous stirring, otherwise the pudding will burn. Pour into forms. My family consists of three people, so I used three bowl and jelly left. It, by the way, can be successfully used as a dessert sauce for pancakes and fritters. In order that the jelly is not formed, the film must be covered with a small amount of sugar. I sprinkled brown universal TM Mistral. A little cool. Feeding can be in the form of heat or cold. When serving, decorate with the frosted corn flakes (or any other you prefer), they also served the dessert to pour as needed. The consistency of the dessert is something of a cross between mashed potatoes and non-liquid jelly, that is not quite the usual jelly. If you want to get more "honey" option, increase the amount of water and starch. Very tasty! Walnuts in particular
73 - - -
Who doesn't love to eat the nuts? In this embodiment, crunching them endlessly... taste very similar to popcorn in the glaze. And what surprised me was that this dish of Japanese cuisine! Puff trifle with fresh strawberries
87 - 10м 2
Trifle is a very popular classic English dessert. It is traditionally prepared for Christmas. It is believed that tripl is the primary basis for this famous Italian dessert like tiramisu. I have prepared for our young, for a romantic afternoon tea=)) Trifle with chocolate cake and pears
69 - 160м 8
A traditional English dessert. Usually, it is cooked on holidays, often on Christmas, and of course each hostess your recipe. I suggest you trifle with chocolate and coffee sponge cake and pears in a sugar syrup, although fruit or berries you can use any. This dessert will have "trouble", but with the aide, as Haas TM everything is easier, the same result exceeds expectations. Azerbaijani pakhlava
74 - - 20
Baklava is a popular pastry of Oriental sweetness. The baklava was prepared by me recipe by Julia Vysotskaya. Kaiserschmarrn
68 - 25м 4
Love it and the adults and children. We can safely call it one of the most famous Austrian cuisine. Easy to enjoy and truly Royal taste. The origin story of "kaiserschmarrn" has acquired a variety of conjectures and stories. But more on that later... Knedli with apricots
111 - 30м -
A delicious hot dessert simple cooking. Can be served for Breakfast, as dessert for lunch and in the afternoon the children. Chocolate pie "Idiot"
110 - - -
Once a famous pastry chef and chocolate expert David Leibovitz called for a new York restaurant where we tried their chocolate cake copyright. After learning his recipe, David called him "the Cake you Idiot," but not in honour of Prince Myshkin, just the composition and preparation of this wonderful dessert was so simple that only a complete idiot in cooking would not be able to make it)) Strawberry souffle
64 - - -
This souffle so aromatic, so delicious and delicate! Level - "I want more and more..."! Try to cook it easy, treat yourself and your loved ones!
More recipes