When my husband first tasted this dish, he asked what it was. When I said the name of the dish, he said literally the following: "Mmm! Dungan noodles! All the same, you are good!" He especially like the fact that this dish is a two in one: the first and the second. The recipe Dungan noodles, but my recipe of this dish different. So put your. 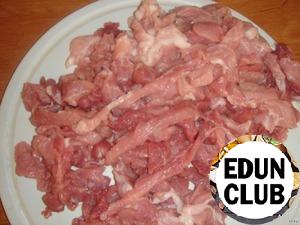 Cut the meat into thin strips. Onion cut into 4 pieces, then slice it into strips. 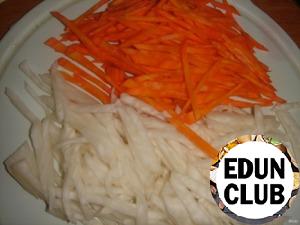 Add to meat, stir and a few minutes to stew. 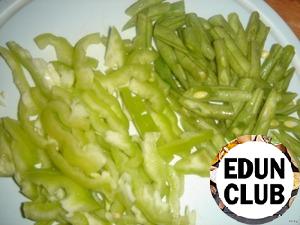 Bulgarian pepper cut into strips. I also had a handful of green beans, I cut pieces of 1.5 cm. Add the vegetables to the meat and a couple of minutes to stew. 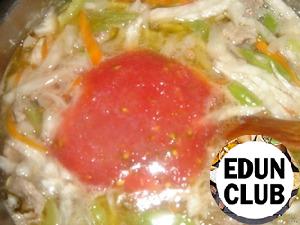 Salt, pepper (black and red pepper), add the coriander (Khmeli-suneli), Bay leaf. Pour water so that the density of the sauce resembled thick soup and wait until boiling.
When boiling, add grated on a fine grater tomatoes, pushed through a garlic press garlic. Allow to simmer for 5-7 minutes. At this stage, at the very end of cooking, add grated on a fine grater potato. Potatoes quickly fall apart and will give the broth richness, density. Again bring to a boil. Cook noodles as directed on package. I prefer this, as in the photo, they are cooked for 5 min. While cooking add a couple tablespoons of vegetable oil directly into the water below them.
Cooked noodles drain in a colander. To serve: in a plate or bowl to put the noodles and pour the gravy. It turns out a cross between noodles and soup. In a bowl add soy sauce to taste.
Sprinkle with herbs and enjoy your meal! Pork Italian
77 - 30м 6
Very quickly, nourishing, with the flavor of smoked food. Handle even a beginner.

Cepelinai
125 4 - -
Recipes cepelinai've seen a lot, but in order for this dish to be, you must know some secrets. I give the recipe cepelinai, following which they will succeed and will be very tasty. The dish is very hearty, high in calories. Maybe You will like it - try it! Meat with Korean carrot
45 - 60м 6
I always left the Korean carrot. Serving the Korean-huge (1 kg) and eat it just like lettuce is boring. Once I decided to combine it with meat and it was very tasty and flavorful. But if the carrots are very sharp, and cold. 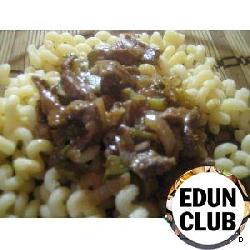