Chile - a famous dish with a very confusing history. Traditionally, chowder chile con carne (i.e. "peppers with meat") was born in Mexico, and from there moved to the United States and became a national dish - in particular, the official national dish of Texas. But if you will be traveling to Mexico, you won't find any Chile - neither CON nor SIN ("no") carne. Classic chili (which "CON") is half meat. But the second half is vegetables! And if it is, this vegetable half, "strengthen" and properly cook, backed by spice and a good oil, it will turn out just delicious, not inferior to Chile from beef. The site already has recipe for chili sin carne but Natasha's dish is cooked as the second, hot, and Chile - it's still soup... very thick, but the soup. At least in the U.S. he serves in that capacity. On the eve of both kinds of kidney beans, rinse and cover with cold water for 10-12 hours. Drain the beans, rinse, cover with 3 cups of cold water, bring to boil and cook on low heat until soft, 40-50 minutes. If necessary, add water. Remove from the heat. 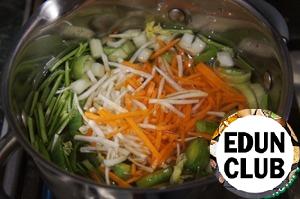 Boil vegetable broth, drain. The broth might need a little more than one liter, it depends on the size of the vegetables. To prepare the products. Instead of tomatoes in own juice in jar, I used crushed tomatoes firm "Pomito", I love to use them. Portions fry the vegetables in a frying pan in a little olive oil on high heat, stirring, for 2-3 minutes.
Eggplant, Then the zucchini... pepper and onion. Cooked vegetables to shift in a big ovenproof form or pan. There add all the beans along with 2 cups of the liquid in which it cooked. Pour into the pan the garlic, cumin, oregano and chili and cook for 30 seconds Add the cherry and canned tomatoes with juice, bring to a boil and cook for 2 minutes Pour in the form of vegetables. 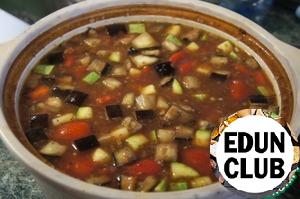 Add the corn. Season with salt and pepper, cover tightly with a lid or with foil and place in a preheated 180*C oven for 50-60 minutes. Ready soup remove from the oven. Cereal vegetable soup
94 - 60м 6
This thick soup resembles porridge "Friendship", but we use the useful barley, buckwheat and oatmeal. The soup looks rich and delicious, and cooked just from products available and without a drop of oil. Soup with boiled eggs
83 4 30м 4
For some, this soup may not be a novelty, it is delicious and easy to prepare. The source was the program "Smak" Makarevich. Bean soup with mushrooms and pork
74 - 90м 6
For fans of thick, rich soups. This is the first and the second. Two-in-one. Tomato soup with quinoa and beans
98 - 25м 4
Recently discovered a wonderful product - quinoa! It can be used in salads, to make him delicious side dishes, and, of course, to add to soups! The soup looks rich and thick and the quinoa adds a really interesting flavor Borschets in my opinion
78 4 120м 8
I have my own view on the kitchen))) I too do not judge strictly, if this recipe has appeared on this site before me Soup with meatballs and stars
123 3.5 30м -
Simple and quick to prepare soup, but my son can eat it everyday three times a day Rice soup "Fast" with chicken liver
97 - 30м 5
Hearty rice soup with chicken liver, which is made in minutes - will be a great dinner or lunch in the summer time, when every minute counts, and the effort to cook almost none). And in rural gardens is not small, all need the time - and to plant and water and weed, and work, and so on)). And at this point a bail out so fast and straightforward, but no less delicious and nutritious recipes.
More recipes